Rohit Shetty on Simmba and Zero release: We were coming on the same date earlier

by IANS for The Indian Express

Director Rohit Shetty revealed that the film Simmba and Zero clash would have affected the box office numbers so both the teams mutually decided to not release their films on the same day.

Rohit Shetty revealed Friday that his upcoming film Simmba and Shah Rukh Khan’s Zero will not release on the same day. Rohit said but both the teams mutually decided to avert the clash. 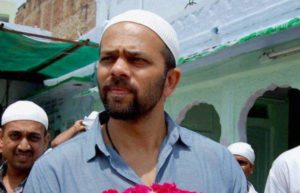 “One week is enough, where is the competition. We were coming on the same date earlier but then me, Karan Johar and Shah Rukh sat and discussed that if we come on the same day then business will get affected. There was no competition as such. It was like a mutual thing. If the film is good it will run,” Rohit told reporters at the Jagran Film Festival here.

Simmba will see Ranveer Singh as a cop. The film will also feature Sara Ali Khan.

“It is a remake and remakes are being made since years. And there’s no harm in making remakes as maybe the younger generation has not caught up with those old films. Simmba has a message in it. And I think it is my best-written film till date,” Rohit said.