by Vladimir Kozlov for The Hollywood Reporter

Delegacioni (The Delegation), co-produced by Albania, France, Greece and Kosovo and directed by Bujar Alimani, was awarded the Grand Prix at the 34th Warsaw International Film Festival, which drew to a close Saturday in the Polish capital. 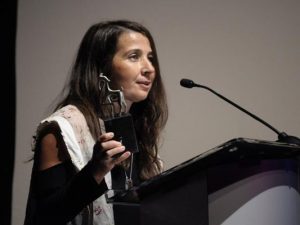 Martina Apostolova took home the Special Jury Award for her performance in the Bulgarian film Irina, directed by Nadejda Koseva.

The jury of the 1-2 competition, which presented directors’ first and second feature efforts, gave its award to the Greece/France/Serbia co-production I doulia tis (Her Job), directed by Nikos Labôt.

Out by French filmmaker Denis Parrot was hailed as the winner of the Free Spirit Competition, which focused on independent cinema.

The Best Documentary Feature Award went to Att sminka en gris (Putting Lipstick on a Pig), directed by Johan Karrento and co-produced by Estonia and Finland.

The Short Grand Prix was awarded to the Ukraine/Poland effort Weightlifter, helmed by Dmytro Sukholytkyy-Sobchuk.