A high-octane action film where a special investigator is assigned a case of serial Killings, he finds the case is not what it seems to be and leading down this path is only going to end in a war between everyone involved.

Vikram is a 2022 Indian Tamil-language action thriller film written and directed by Lokesh Kanagaraj and produced by Raaj Kamal Films International. The film stars Kamal Haasan, Vijay Sethupathi and Fahadh Faasil. Kalidas Jayaram, Narain and Chemban Vinod Jose play supporting roles while Suriya makes a cameo appearance as Rolex. The film’s soundtrack and score are composed by Anirudh Ravichander, with cinematography handled by Girish Gangadharan and editing done by Philomin Raj. The film serves as the second installment in the Lokesh Cinematic Universe (LCU). The plot follows a black-ops squad led by Agent Vikram, in which he aims a drug syndicate group called Vetti Vagaiyara, led by Sandhanam, who wants the missing drugs to be delivered to his cold-blooded boss Rolex. 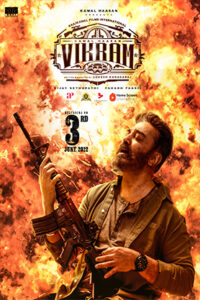