Plot: A bounty hunting scam joins two men in an uneasy alliance against a third in a race to find a fortune in gold buried in a remote cemetery.

The Good, the Bad and the Ugly (Italian: Il buono, il brutto, il cattivo, literally “The Good One, the Ugly One, the Bad One”), released in 1966, is one of the Dollars Trilogy of Spaghetti Westerns that served as a Deconstructor Fleet to the entire Western genre. It is the last, and probably the most famous of the trilogy, and is credited with helping to kill the Western genre (due to how thoroughly it disassembles said genre) and inventing a bevy of new tropes (even popularizing the Mexican Standoff). It’s had an incredible impact on the entirety of film-making since then, and is generally regarded as one of the greatest films ever created.

During The American Civil War, the bounty hunter “Blondie” (Clint Eastwood) and the bandit Tuco (Eli Wallach) are running a con game until the former decides to terminate their partnership and take the money. Tuco sets out for revenge. A mercenary, Angel Eyes (Lee Van Cleef), finds out about a stolen cache of Confederate gold, and learns the name of the man who knows where it’s hidden. Tuco and Blondie stumble upon this knowledge and the three gunslingers engage in a battle of betrayal across the war-torn landscape. 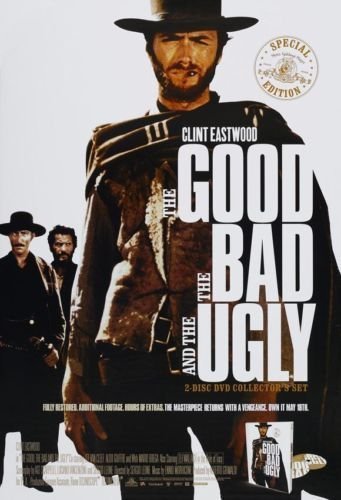