Plot: Jealousy and hatred is what separates the Pandavas and Kauravas. The Kauravas fear the Pandavas are after the throne of their father. Yudhishthira of the Pandavas gets told by the deity, Krishna, that he will become king. A war is inevitable.

The Mahabharata is a 1989 film version of the Hindu epic, Mahabharata directed by Peter Brook. Brook’s original 1985 stage play was 9 hours long, and toured around the world for four years. In 1989, it was reduced to under 6 hours for television (TV mini series). Later it was also reduced to about 3 hours for theatrical and DVD release. The screenplay was the result of eight years’ work by Peter Brook, Jean-Claude Carrière and Marie-Hélène Estienne.

In general terms, the story involves epic incidents between two warring families, the Pandavas (representing the good side) and the Kauravas (representing the bad side). Both sides, being the offspring of kings and gods, fight for dominion. They have both been advised by the god Krishna to live in harmony and abstain from the bloody lust for power. Yet their fights come to threaten the very order of the Universe. The plot is framed by a dialogue between the Brahmin sage Vyasa and the Hindu deity Ganesha, and directed towards an unnamed Indian boy who comes to him inquiring about the story of the human race. 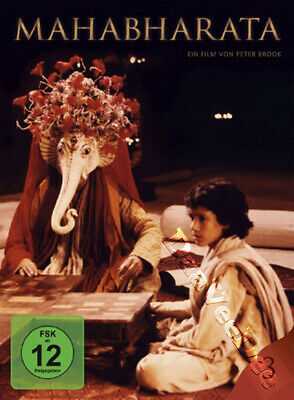