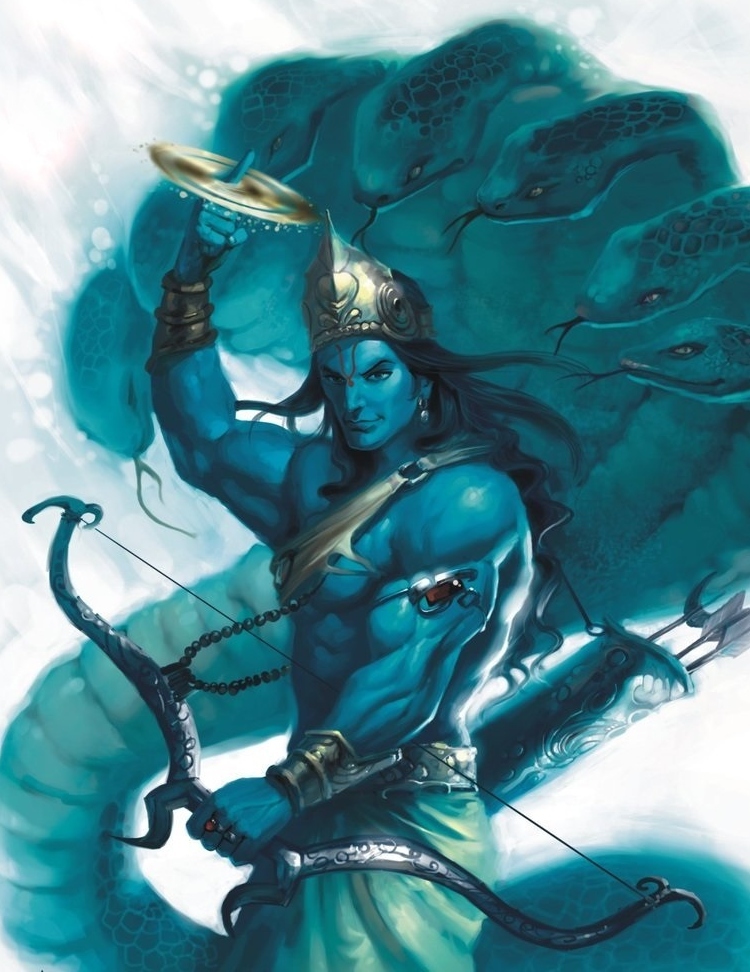 Vishnu is one of the principle deities of Hinduism, and, along with Brahma and Shiva, forms the Hindu trinity. Vishnu is the peace-loving deity of that trinity, the Preserver or Sustainer of Life.

Vishnu is the Preserver or Sustainer of life, known for his steadfast principles of order, righteousness, and truth. When these values are under threat, Vishnu emerges out of his transcendence to restore peace and order on earth.

The Ten Avatars of Vishnu

Vishnu’s earthly incarnations include many avatars: the ten avatars include Matsyavatara (fish), Koorma (tortoise), Varaaha (boar), Narasimha (the man-lion), Vamana (the dwarf), Parasurama (the angry man), Lord Rama (the perfect human of the Ramayana), Lord Balarama (Krishna’s brother), Lord Krishna (the divine diplomat and statesman), and the yet-to-appear tenth incarnation, called the Kalki avatar. Some sources consider Buddha as one of the avatars of Vishnu. This belief is a recent addition from a time when the concept of Dashavatara was already developed.

In his most common form, Vishnu is portrayed as having a dark complexion–the color of passive and formless ether, and with four hands.

On one of the backhands, he holds the milky white conch shell, or sankha, that spreads the primordial sound of Om, and on the other a discus, or chakra–a reminder of the cycle of time–which is also a lethal weapon that he uses against blasphemy. It is the famous Sudarshana Chakra that is seen whirling on his index finger. The other hands hold a lotus or padma, which stands for a glorious existence, and a mace, or gada, that indicates punishment for indiscipline. 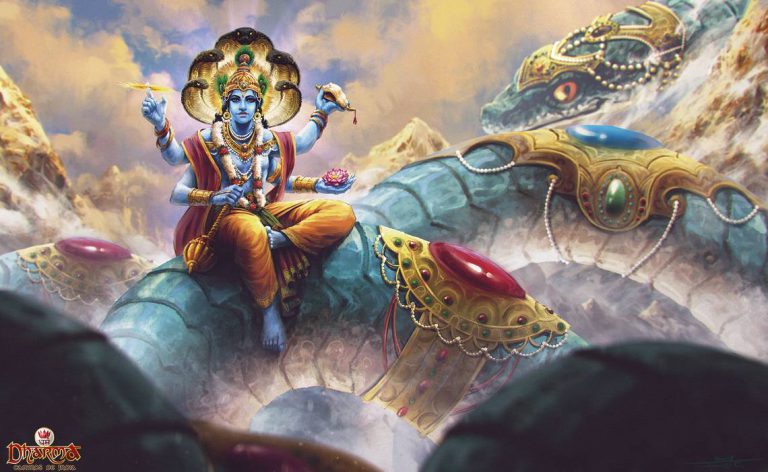 The Lord of Truth

Out of his navel blossoms a lotus, known as Padmanabham. The flower holds Brahma, the God of Creation and the embodiment of royal virtues, or Rajoguna. Thus, the peaceful form of Lord Vishnu discards the royal virtues through his navel and makes the Sheshnag snake that stands for the vices of darkness, or Tamoguna, his seat. Therefore, Vishnu is the Lord of Satoguna–the virtues of the truth.

The Presiding Deity of Peace

Vishnu is often depicted as reclining on a Sheshanaga–the coiled, many-headed snake floating on cosmic waters that represent the peaceful Universe. This pose symbolizes the calm and patience in the face of fear and worries represented by the poisonous snake. The message here is that you should not let fear overpower you and disturb your peace.

The vehicle of Vishnu is the Garuda eagle, the king of the birds. Empowered with the courage and speed to spread the knowledge of the Vedas, Garuda is an assurance of fearlessness at the time of calamity.

Vishnu is also known as Narayana and Hari. The devout followers of Vishnu are called Vaishnavas, and his consort is Goddess Lakshmi, the goddess of wealth and beauty.

The Ideal Leader Among All Hindu Gods

Vishnu can well be seen as the model of an ideal leader that our Vedic forefathers envisioned. As mythologist Devdutt Pattanaik notes:

Between Brahma and Shiva is Vishnu, full of guile and smiles. Unlike Brahma, he is not attached to the organization. Unlike Shiva, he is not disengaged from it. Like Brahma, he creates. Like Shiva, he also destroys. Thus he creates balance, harmony. A true leader who is wise enough to distinguish god from demon, fighting for the gods but knowing their frailties and defeating the demons but knowing their value. . . a mixture of heart and head, engaged but not attached, constantly aware of the big picture.