Shukra is a Sanskrit word that means “lucid, clear, bright”. It also has other meanings, such as the name of an ancient sage who counselled Asuras in Vedic mythology. In medieval mythology and Hindu astrology, the term refers to the planet Venus, one of the Navagrahas.

While Guru (Jupiter) is Deva (Sura) Guru, Shukra or Shukracharya (Venus) is considered as Asura Guru. Shukra is considered to be a God(dess) of love, marriage, beauty and comforts. It is called Mahalakshmi, wife of lord Vishnu. Shukracharya is one-eyed. Since it rules all kinds of beauty, pleasure, passion etc, it is called Aphordite by the Greeks. It is the chief governor of wife in male’s horoscope.It gives immense taste and fancy for all pleasure-giving and luxurious things. Intelligence coupled with an artistic taste and fineness is bestowed by Shukra. It is also significator of vehicles and property in affluent area. Shukra is also connected to Kama (Deity that rules human’s passion, desires etc).

Shukra is a feminine, warm, temperate and fruitful planet. Shukra is the lord of direction South-East and governs Vasanta Ritu (April and May). Shukra rules Yajur Veda. Its color is white or mix of different colors. It rules marriage, youthfulness, sexual pleasure, scents, flowers, ability to compose music and drama, inclination to take light and rich food. It also indicates the partner in business. 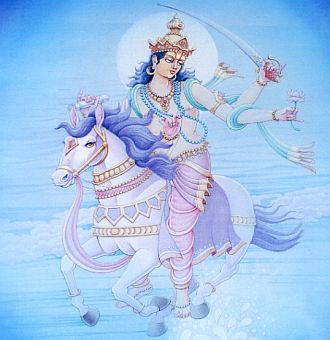 In one ideology, Shukra is the name of a son of Bhrigu, of the third Manu, one of the saptarishis. He was the guru of Daityas / Asuras, and is also referred to as Shukracharya or Asuracharya in various Hindu texts. He named the Velleeswarar Temple, Mangadu after the blessings of the Trimurti, to mark the end of a long period of blindness. In another account found in the Mahabharata, Shukra divided himself into two, one half becoming the knowledge source for the Devas (gods) and the other half being the knowledge source of the Asuras (demons). Shukra in the Puranic ideology is famed as one with the knowledge that raises the dead back to life, something that helps the violent evil return to life even after the gods and the forces of good destroy them; this knowledge is sought by the gods and is ultimately gained by them.

In the Mahabharata, Shukracharya is mentioned as one of the mentors of Bhishma, having taught him political science in his youth.

Shukra as a planet appears in various Hindu astronomical texts in Sanskrit, such as the 5th century Aryabhatiya by Aryabhatta, the 6th century Romaka by Latadeva and Panca Siddhantika by Varahamihira, the 7th century Khandakhadyaka by Brahmagupta and the 8th century Sisyadhivrddida by Lalla. These texts present Shukra as one of the planets and estimate the characteristics of the respective planetary motion. Other texts such as Surya Siddhanta dated to have been complete sometime between the 5th century and 10th century present their chapters on various planets with deity mythologies.

The manuscripts of these texts exist in slightly different versions, present Shukra’s motion in the skies, but vary in their data, suggesting that the text were open and revised over their lives.

The 1st millennium CE Hindu scholars had estimated the time it took for sidereal revolutions of each planet including Shukra, from their astronomical studies, with slightly different results. 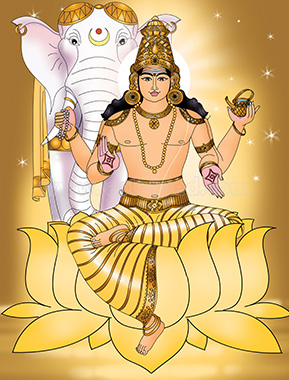