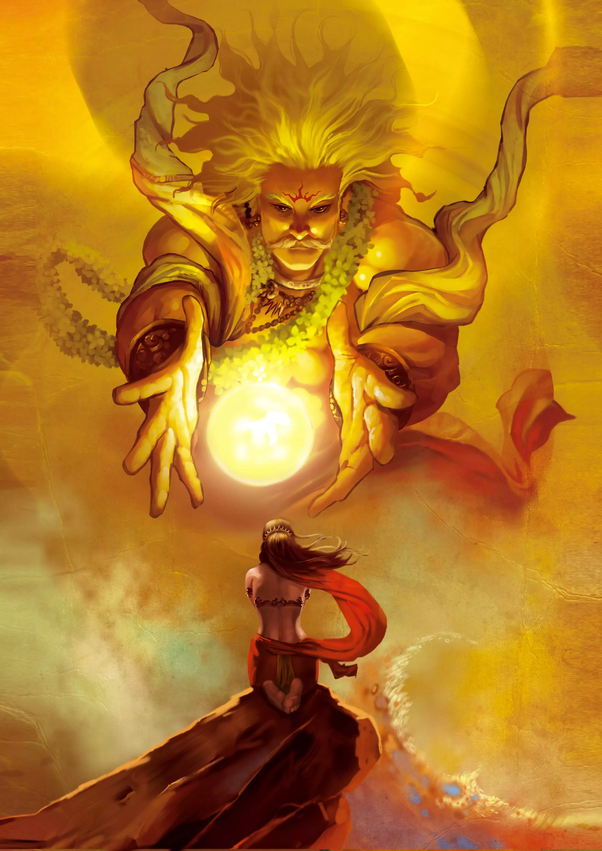 Surya is the mythological father of many notable sons, including Manu (progenitor of the human race), Yama (god of the dead), the Ashvins (twin physicians to the gods), Karna (a great warrior in the Mahabharata), and Sugriva (king of the monkeys in the Ramayana). The Puranas (collections of Hindu myths and legends) record that the weapons of the gods were forged from pieces trimmed from Surya, whose full emanation was too bright to bear. His power was conceived of as dispelling darkness, curing disease, and heating and illuminating the world.

The Sun God in Hindu Mythology

The main deity of the Navagrahas or the Nine Planets of Hindu Astrology as well, he is also considered as one of the Navagrahas. Surya is often portrayed as riding a chariot driven by 7 horses or alternatively, by 1 horse with 7 heads. These 7 horses represent the colors of the rainbow and the 7 chakras in the subtle human body as well. Surya is sometimes shown with 2 hands, holding one lotus in each and sometimes with 4 hands, holding a lotus, Sankha (conch), Chakra (discus) and Gada (mace).

Surya Devata in Hinduism is considered to be an eye of the Virata Purusha, or the Vishwarupa (Universal Form) of Lord Sri Krishna himself. Incidentally, Surya is worshipped by people, saints and even asuras or demons. Certain groups of Rakshasas, called the Yatudhanas, were staunch followers of the Sun God.

Surya Devata is regarded as the Supreme Being among the followers of the Saura sect, which has now become very small and is almost endangered. The Sauras worship him as one of the five major forms of God.

One can find many temples, all over India, dedicated to the worship of Surya. He is worshipped in the early hours of dawn, especially on Hindu festivals such as Makar Sankranti, Ratha Saptami, Chhath and Samba Dashami.
Most Common Forms of Surya
Surya is worshipped in many forms. But two of the most common forms of the deity are Arka and Mitra.

Surya in the form of Arka is worshipped mostly in North and Eastern India. The very grand and elaborate Konark Temple in Orissa, the Uttararka and Lolarka in Uttar Pradesh, the Balarka temple in Rajasthan and the Sun Temple at Modhera, Gujarat, are all dedicated to his form of Arka. Yet another temple, the Balarka Surya Mandir built in Uttar Pradesh in the 10th Century, was destroyed in the 14th Century, during the Turkish invasion.

The other most common form of Surya, namely, Mitra, is found mostly in Gujarat. “Mitra” literally means “friend”.

Lord Surya is hailed by 108 names. The commonest among them are Aditya, Adideva, Angaraka, Arka, Bhaga, Brahma, Dhanwantari, Dharmadhwaja, Dhatri, Dhumaketu, Indra, Jaya, Maitreya, Prabhakara, Ravi, Rudra, Savitri, Soma, Teja, Vaisravana, Vanhi, Varun and Vishnu.
Surya: Family and Relationships
Surya, or Vivasvata, had 3 queens, namely, Sharanya (also called Saraniya, Saranyu, Sanjana or Sangya), Ragyi and Prabha. Sharanya was the mother of Vaivasvata Manu (or Satyavrata, the present Manu) and the twins Yama (the God of Death) and his sister Yami. Later, she also gave birth to the Ashvin twins, who were the divine horsemen and physicians to the Devas.

Being unable to bear the extreme radiance emitted by Surya, Sharanya created a superficial shadow of herself, called Chhaya. She asked her to act as Surya’s wife. In due course of time, Chhaya gave birth to 2 sons, namely, Savarni Manu and Shani (Planet Saturn) and 2 daughters, namely, Tapti and Vishti. Surya’s other wife, Ragyi, gave birth to their son, Revanta or Raivata.

In the Ramayana and the Mahabharata

In the Ramayana, Surya is said to be the father of King Sugriva. Sugriva was the one who helped Rama defeat the terrible demon king, Ravana. He imparts training to Hanuman to help him lead the Vanara Sena or the Army of Monkeys. Interestingly, Lord Rama himself is a descendant of Surya – he is a Suryavanshi, that is, hailing from the dynasty of the Suryavanshas.

Surya bears great significance in the Mahabharata as well. According to this epic, Kunti receives the diksha for a mantra from the short-tempered sage, Durvasa. She was given the boon that whenever she chanted this mantra, she would be able to summon a Deva and also bear a child by him. Without realizing its seriousness, Kunti tested the mantra, summoning Surya. As Surya was forced to fulfill the obligation of the mantra, she miraculously begot a child from him, while actually retaining her virginity. Not able to bear the thought of becoming an unwed mother, princess Kunti was compelled to abandon her son, Karna, who later grew up to be one of the greatest ever warriors and a central character in the battle of Kurukshetra.

Incidentally, the first book of the Mahabharata does not mention Surya as one of the Adityas. However, he may be regarded as the joint strength of all the 12 solar deities, namely, Dhatri, Mitra, Aryaman, Sakra, Varuna, Amsa, Vaga, Vivaswat, Usha, Savitri, Tvashtri, Vishnu. 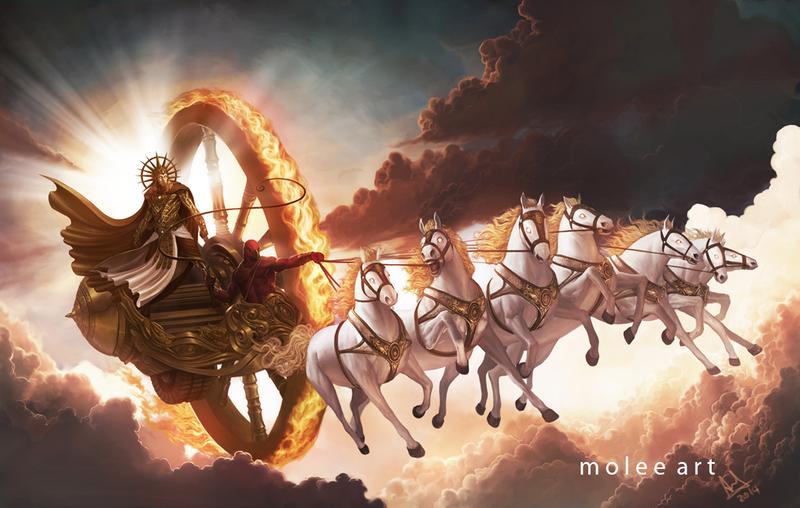 The Sun God enjoys great importance in Greek and Egyptian mythology. Surya’s Greek counterpart is Helios and the Egyptian Sun God is Ra.

In Zoroastrianism, which is based on the worship of Fire, the Sun is described as the “Eye of Ahura Mazda”. This bears resemblance to Hinduism, which considers Surya to be one eye of Sri Maha Vishnu.

In Vedic astrology, Surya is regarded as slightly volatile, due to his nature of being too radiant and emitting too much heat. The Sun thus represents the soul, vitality, courage, willpower, authority, royalty and so on. His position is exalted in Mesha or Aries and takes a backward position in Tula or Libra. In Hindu horoscopes, the best location for Surya is considered to be right overhead, on the 10th house and on the 1st, 5th and 9th houses.

Surya is the Lord of Krittika, Uttara Phalguni and Uttara Ashadha. He is often associated with reds, coppers and metallic colors and his gemstone is ruby.

Surya Deva is known to be strong, powerful and invincible. However, he too was once subdued by Hanuman, the greatest devotee and also the humble sevak (servant) of Lord Rama. He had an interesting episode with Surya during his childhood. A rather playful and mischievous monkey in his baalyaavastha (childhood), Hanuman leapt up to the skies and started chasing Surya, mistaking him to be a ripe mango! He kept pursuing the Sun, wanting to eat what he thought was the delicious fruit.

Later, when he realized that Surya was the all-knowing teacher, Hanuman raised his body and positioned himself to orbit around the Sun, also requesting him to accept him as a disciple. Surya refused, saying that he could never be in one place, as he had to constantly traverse around the world. An undeterred Hanuman continued to pursue Surya and kept pleading persistently. Surya then agreed and passed on his knowledge to Hanuman.

In this way, Surya emerged as a Karma Saakshi, the Eternal Witness of all deeds. The former also gave Hanuman 2 siddhis, namely, laghima and garima, which enabled him to take the smallest form and the largest form, respectively, at will.

Surya Namaskara or the “Sun Salutation”

Many devout Hindus regularly perform the Surya Namaskara, literally meaning, “Sun salutation”. This mode of worship is essentially made up of 11 asanas or yogic postures, which are assumed in successive movements, along with breath control, to form a flowing series of one complete namaskara. 12 mantras are chanted for each of these namaskaras. The Surya Namaskara is not only considered auspicious, but is also very beneficial for all-round health and wellness, both physical and mental.
Suryopasana or Sun Worship
Many Hindus perform regular Suryopasana, that is, offering worship to the Sun God. The period from April 12th to 23rd is considered most auspicious for the worship of Surya. Surya is believed to be the giver of intelligence, confidence, good health, courage, strength, leadership qualities, independence, fame, success, power and much more. While an ill-placed position of the Sun in a person’s horoscope could indicate low self-esteem, lack of confidence, ill health and dependency; an overly strong placement of the Sun could also trigger many negative qualities in the person concerned.

After having a bath early morning, the seeker has to offer jal or water to Surya, looking in his direction, paying salutations to the Lord. Surya is regarded as a manifestation of the Brahman and so he is often referred to as Surya Narayana.

One can chant the Vedic mantra of Surya, which is mentioned right at the very beginning of this article.

The puranic mantra of Surya is as follows:

Adityahridayam is a sloka or hymn in praise of Aditya, the Sun God. It was originally recited by Sage Agastya to Rama on the battlefield, before the latter went to fight the demon king, Ravana. Belonging to the Yuddha Kanda of the Ramayana, this hymn starts at the beginning of the Rama-Ravana duel. Rama was exhausted after a long day’s fight with the army of Lanka and so, Agasya taught him the mantra in order to gain the courage and strength to face the enemy. The hymn was later compiled by Sage Valmiki.

The Adityahridayam comprises a total of 30 slokas, which contain the whole episode of Agastya telling Rama about the greatness of Lord Surya; relating the benefits of reciting the hymn; the sloka itself; and how the Lord pervades the Consciousness and is actually one with the jeevatma.
The Adityas
The word “Aditya” in Sanskrit refers to something “that comes from Aditi”. In other words, it refers to “the offspring of Aditi”. Aditya also means the Sun.
In the Rigveda
According to the Rigveda, the Adityas are the 7 sons of Aditi. These celestial beings are Varuna, Mitra (or Surya), Aryaman, Bhaga, Amsa, Dhatri and Indra. Aditi had an eighth Aditya as well, called Martanda, who she rejected and disowned.

The Yajurveda records the existence of 8 Adityas, the last one being, Vivasvan. Some believe that this entity was actually Martanda, who was revived and then became Vivasvan.

The Rigveda describes the Adityas as akin to pure streams of water, free from all guile, falsehood and negativity. They have also been attributed as being completely Dharmic or righteous. They are benevolent divine beings, who protect all beings and also guard the world of the spirits.