Written by David Courtney for Chandrakantha.com 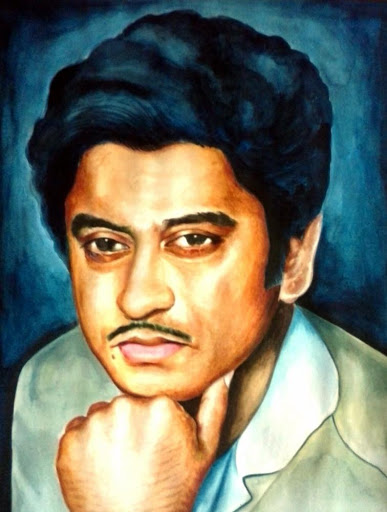 Kishore Kumar, original name Abhas Kumar Ganguly, (born August 4, 1929, Khandwa, British India—died October 13, 1987, Bombay (now Mumbai), Indian actor, playback singer, composer, and director known for his comic roles in Indian films of the 1950s and for his expressive and versatile singing voice, which, in the course of a career that spanned nearly four decades, he lent to many of India’s top screen actors. 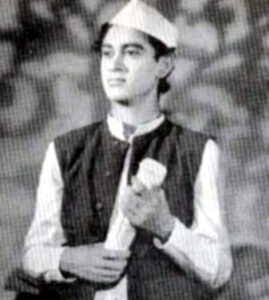 Kishore Kumar was an actor, and playback singer in Bollywood films. He was most active from 1949 until his death in 1987. He was famous for singing upbeat light songs, and light comical acting roles. However in his long career, he worked in almost every capacity in the film industry; not only as a a singer and actor but as a screenwriter, producer, director, and script writer.

Kishore Kumar was born Abhas Kumar Ganguly on August 4, 1929 in Khandwa (present day Madhya Pradesh). Although this is a Hindi speaking area he was a Bengali. His father was a lawyer named was Kunjilal, and his mother’s name was Gouri Devi. He was one of four children. He had two older brothers named Ashok Kumar and Anoop Kumar, and a younger sister named Sati.

Kishore Kumar’s entrance to the film industry was very different from most people. Most of the famous playback singers struggled hard to find a position and struggled equally hard, often unsuccessfully to retain that position. However Kishore Kumar easily slid into the film industry without any real effort. The reason for this was through the influence of his elder brother Ashok Kumar.

Kishore Kumar never had any formal musical training but this did not stop him. In his career he showed proficiency in a variety of musical styles. Furthermore he was able to pick up the piano and played it well.

The young Kishore and his family used to visit Ashok Kumar in Bombay very often. There was 18 years difference between Ashok and Kishore, so the elder Ashok was well established in the film field while Kishore was still just a kid. Due to his brother’s connections, Kishore was able to secure odd positions at an early age. When quite young he became a chorus singer for Bombay Talkies, where his brother Ashok worked. This was in spite of the fact that Kishore never had any formal training in music. Several other films also came his way. Kishore got his first role in “Shikari” (1946); he was only about 17 at the time. He was also hired by Khemchand Prakash to sing a song for the film “Ziddi” (1948). These were just odd assignments, Kishore was still with his family then and not in Bombay where the Hindi film industry was centred. 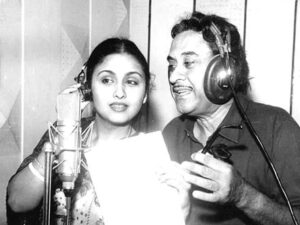 Kishore Kumar’s personal life during this period is somewhat mixed. In 1951 he married the first of his four wives, the actress / singer Ruma Guha Thakurta (a.k.a. Ruma Ghosh). This marriage lasted until 1958 when they divorced. This union produced a son, Amit Kumar. (Today Amit Kumar is a noted actor, singer, music director and director.)

However Kishore Kumar’s real interest was in playback singing. It was S.D. Burman who first tapped Kishore’s inner talents as a playback singer. It was during the making of “Mashaal” that SD Burman told Kishore that he was trying too hard to imitate KL Saigal. SD Burman persuaded Kishore to develop his own style. In this period, he sang for a number of films. Some of the major ones were, “Munjim” (1954), “Nau Do Gyarah” (1957).

Kishore was not afraid to borrow unusual techniques. For instance he was inspired by the yodelling that he heard on his brothers phonograph records; he adapted this technique with great public appreciation. He used this in a number of films, such as “New Delhi” (1957) and “Pyar Ka Mausam” (1969).

Although acting did not seem to be his real passion, he continued to act in a number of capacities. His romantic hero personas never really clicked at the box office, however his comedic roles really proved to be his forte. This was amply demonstrated in such films as “New Delhi” (1957), “Asha” (1957), “Chalti Ka Naam Gaadi” (1958), “Half Ticket” (1962), and “Padosan” (1968).

There are a large number of Asha Bhosle / Kishore Kumar Duets. Many result from the SD Burman / Lata Mangeshkar feud which was going on from 1957 to 1962. Many also result from R.D. Burman’s preference for Asha over Lata as well. Some notable duets were Ankhon Mein Kya Ji from “Nau Do Gyarah” (1957) or Paanch Rupaiya Baara Aana from “Chalti Ka Naam Gaadi” (1958). 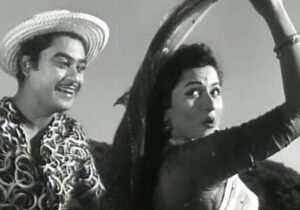 During this period there were also developments in Kishore Kumar’s personal life. In 1960 he married the actress Madhubala (real name Mumtaz Begum Jehan Dehlavi) with whom he had worked in such films as “Chalti ka Naam Gaadi” (1958). This marriage created considerable ill will in the family because he was Hindu and she was Muslim. Their marriage was a civil marriage and Kishore Kumar’s parents refused to attend. Later Kishore and Madhubala had a Hindu ceremony to appease his parents, but to very little advantage. After only a month of marriage, she leaves the Kumar’s household and returns to her own residence.

They remain married for the rest of her life, but under somewhat strained circumstances. At the time she was suffering from a heart condition. It became progressively worse and she died on February 23, 1969.

In the 1960’s Kishore Kumar began to expand his involvement to include almost every aspect of film production. For instance, he produced, directed, and acted in “Jhumroo” (1961). Furthermore, he wrote the lyrics for the title song, and composed music for all of the songs in the film. Other films that he produced and directed were “Door Ka Rahi” (1971) and “Door Waadiyon Mein Kahin” (1980).

The 1960s were a mixed period for Kishore Kumar. On the bright side, there were a number of hit songs from this period. Some examples are Gaata Rahe Mera Dil from “Guide” (1964), and Yeh Dil Na Hota Bechara from “Jewel Thief” (1967). However he also had his problems. For instance there was the much publicised problems with the Indian government over income tax evasion. He began to acquire a reputation of being unreliable; he frequently used to come late for recordings and occasionally would not show up at all. Furthermore many of is movies flopped. To make matters worse, There was also the tense marital relationship with his wife Madhubala; compounded by her deteriorating health. By 1968 he was so disheartened that he was considering retirement.

However the 1970’s began to look much better. His song Roop Tera Mastana from the 1969 film “Aradhana” won him a Filmfare Award. He was getting a lot of work, and his public reputation was on the rebound. 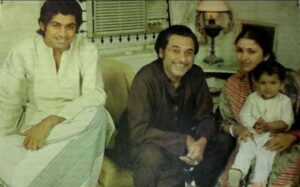 The mid 1970’s saw Kishore Kumar being pulled into national politics. He was an outspoken critic of Indira Gandhi during the Emergency. One time Sanjay Gandhi asked Kishore to sing for a Congress rally in Bombay, Kishore refused. His refusal to perform resulted in his songs being banned by All India Radio and Doordarshan. (It is interesting to note that even by Indian standards Sanjay Gandhi was known for his extreme abuses of power.)

During this period his personal life was also rather tumultuous. In 1976 Kishore Kumar married his third wife, the film actress Yogeeta Bali. However this marriage did not last, they divorce in 1978.

The late 1970s was another difficult period. The AIR / Doordarshan boycott certainly did not help his career. There was an occasional hit song, but by and large Kishore’s films were not doing well in the box-office. In the mid 70’s he greatly cuts back on his acting roles and his last screen role is in “Door Wadiyon Mein Kahin” (1980).

However it appears that his personal life begins to stabilise during this period. In 1980 he marries his fourth wife, the film actress Leena Chandavarkar. She bares him a son named Sumeet Kumar. They remain married until his death in 1987. 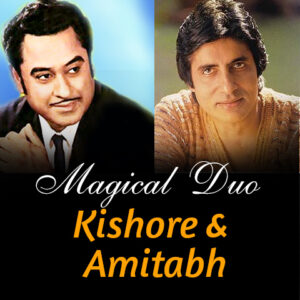 The Bollywood film industry is full of personality conflicts and Kishore Kumar was no exception. There was the well publicised friction between Kishore Kumar and Amitabh Bachchan. Kishore Kumar refused to do playback singing for Amitabh after he refused to participate in a film which was being produced by Kishore Kumar. However there was a reconciliation where Kishore sang for him in Toofan (1989, this was released after Kishore’s death). There was also a short period where Kishore refused to sing for Mithun Chakraborty. The cause of this appears to be Mithun’s marriage Kishore’s ex-wife Yogeeta Bali. However this too was later resolved and Kishore sang for Mithun in films such as “Disco Dancer” (1982) and “Pyar ka Mandir” (1988).

1986 is a critical year for Kishor Kumar. He suffers from a heart attack. He recovers from the this, but it causes him to greatly reduce his recording schedule. He plans to go into retirement and return to his birthplace of Khandwa; but this just does not seem to happen. Kishore’s last recording was a playback song for Mithun Chakraborty. This was a duet with Asha Bhosle for the film “Waqt Ki Aawaz” (1988).

In 1987 he suffers another massive heart attack in Bombay. He died on October 13, 1987, at the age of 58. His body was taken back to his birthplace of Khandwa for cremation.

Kishore Kumar’s reputation remains unabated after his death. There are endless streams of commemorative works, remixes and repackaging of earlier recordings. 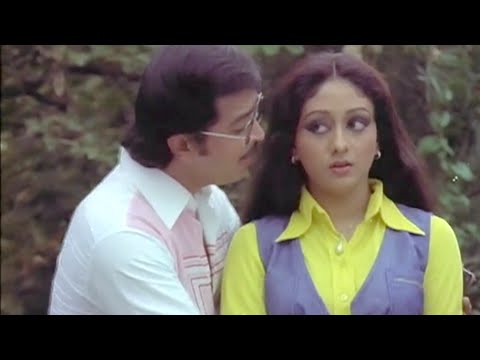 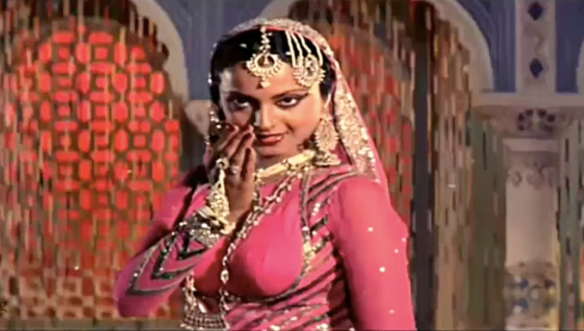 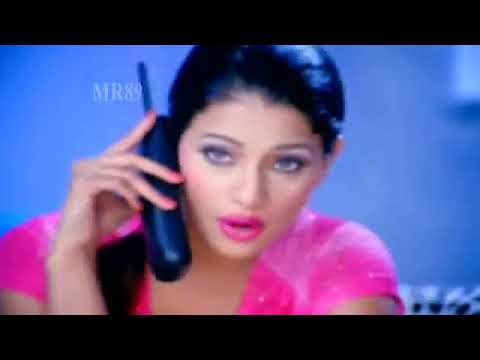 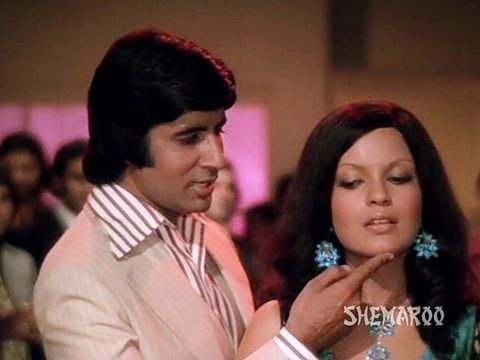