Kali – The Goddess Who Liberates Souls 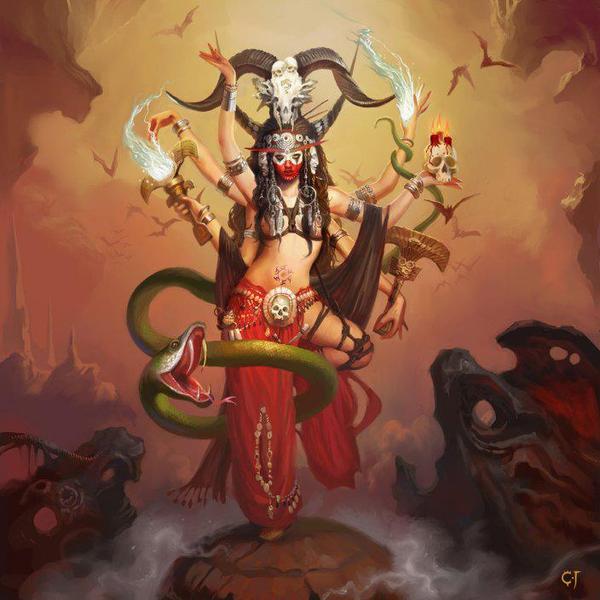 The love between the Divine Mother and her human children is a unique relationship. Kali, the Dark Mother is one such deity with whom devotees have a very loving and intimate bond, in spite of her fearful appearance. In this relationship, the worshipper becomes a child and Kali assumes the form of the ever-caring mother.

“O Mother, even a dullard becomes a poet who meditates upon thee raimented with space, three-eyed, creatrix of the three worlds, whose waist is beautiful with a girdle made of numbers of dead men’s arms…”
(From a Karpuradistotra hymn, translated from Sanskrit by Sir John Woodroffe)

Kali is the fearful and ferocious form of the mother goddess. She assumed the form of a powerful goddess and became popular with the composition of the Devi Mahatmya, a text of the 5th – 6th century AD. Here she is depicted as having born from the brow of Goddess Durga during one of her battles with the evil forces. As the legend goes, in the battle, Kali was so much involved in the killing spree that she got carried away and began destroying everything in sight. To stop her, Lord Shiva threw himself under her feet. Shocked at this sight, Kali stuck out her tongue in astonishment and put an end to her homicidal rampage. Hence the common image of Kali shows her in her mêlée mood, standing with one foot on Shiva’s chest, with her enormous tongue stuck out.

Kali is represented with perhaps the fiercest features amongst all the world’s deities. She has four arms, with a sword in one hand and the head of a demon in another. The other two hands bless her worshippers, and say, “fear not”! She has two dead heads for her earrings, a string of skulls as a necklace, and a girdle made of human hands as her clothing. Her tongue protrudes from her mouth, her eyes are red, and her face and breasts are sullied with blood. She stands with one foot on the thigh, and another on the chest of her husband, Shiva. 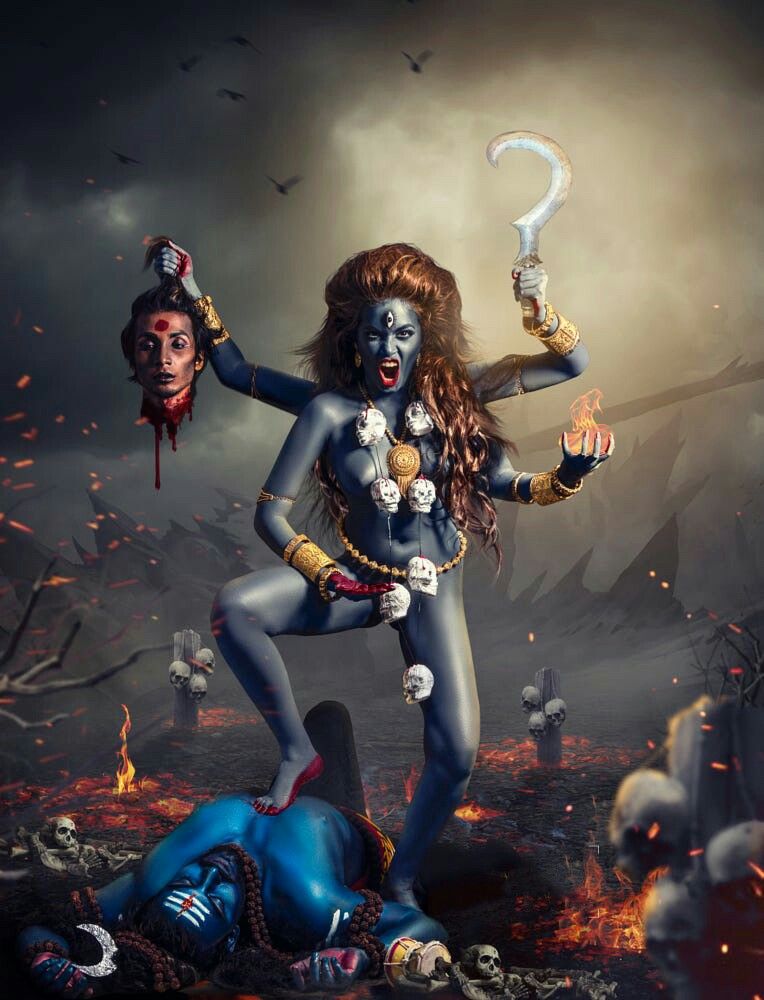 Kali’s fierce form is strewed with awesome symbols. Her black complexion symbolizes her all-embracing and transcendental nature. Says the Mahanirvana Tantra: “Just as all colors disappear in black, so all names and forms disappear in her”. Her nudity is primeval, fundamental, and transparent like Nature — the earth, sea, and sky. Kali is free from the illusory covering, for she is beyond all maya or “false consciousness.” Kali’s garland of fifty human heads that stands for the fifty letters of the Sanskrit alphabet, symbolizes infinite knowledge.

Her girdle of severed human hands signifies work and liberation from the cycle of karma. Her white teeth show her inner purity, and her red lolling tongue indicates her omnivorous nature — “her indiscriminate enjoyment of all the world’s ‘flavors’.” Her sword is the destroyer of false consciousness and the eight bonds that bind us.

Her three eyes represent past, present, and future, — the three modes of time — an attribute that lies in the very name Kali (‘Kala’ in Sanskrit means time). The eminent translator of Tantrik texts, Sir John Woodroffe in Garland of Letters, writes, “Kali is so called because She devours Kala (Time) and then resumes Her own dark formlessness.”

Kali’s proximity to cremation grounds where the five elements or “Pancha Mahabhuta” come together and all worldly attachments are absolved, again point to the cycle of birth and death. The reclined Shiva lying prostrate under the feet of Kali suggests that without the power of Kali (Shakti), Shiva is inert.

Kali’s guises and names are diverse. Shyama, Adya Ma, Tara Ma, and Dakshina Kalika, Chamundi are popular forms. Then there is Bhadra Kali, who is gentle, Shyamashana Kali, who lives only in the cremation ground, and so on. The most notable Kali temples are in Eastern India — Dakshineshwar and Kalighat in Kolkata (Calcutta) and Kamakhya in Assam, a seat of tantric practices. Ramakrishna Paramahamsa, Swami Vivekananda, Vamakhyapa, and Ramprasad are some of the legendary devotees of Kali. One thing was common to these saints — all of them loved the goddess as intimately as they loved their own mother.

“My child, you need not know much in order to please Me.

Only Love Me dearly.

Speak to me, as you would talk to your mother,

if she had taken you in her arms.”