Indra: God of Thunder and Lightning. 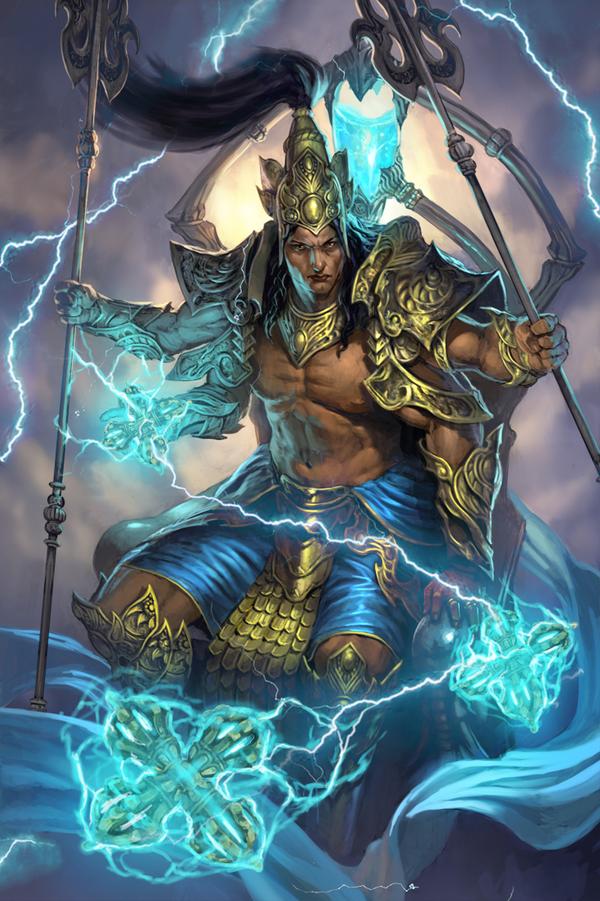 Indra, in Hindu mythology, the king of the gods. He is one of the main gods of the Rigveda and is the Indo-European equivalent of the German Wotan, Norse Odin, Greek Zeus, and Roman Jupiter.

In ancient Vedic literature, Lord Indra is depicted as a war god, a destructive force that yields a powerful weapon in the form of the vajra. However, as we shall see, Indra is not so much a god of waging battles but is the aspect of our nature that enables us to summon courage and confidence.

The Symbolic Meaning of the Hindu God Indra

In the Rig Veda, the earliest Hindu texts, Indra was regarded as one of the most powerful Gods. Although he has retained his tag as a Supreme God in modern Hinduism, the evaluation of his role in the development of consciousness has taken a back seat to the Trimurti.

But Indra is still recognised as an important God and owns the title of King of the Gods – this means he is the mightiest of all the other gods of the Hindu pantheon with the exception of the Supreme Trinity – Brahma, Vishnu and Shiva.

Given his importance, Indra is considered to be the “defender of mankind” and is seen in Hindu myth protecting mortals of the earth against the demon asuras. On a symbolic level, the asuras represent our dark passenger – satan – that leads us into temptation.

In ancient Hindu mythology, Indra is depicted as a storm god, the master of thunder and lightning. His most powerful weapon is the vajra, a lethal thunderbolt which he uses to destroy his enemies.

In ancient symbolism, a lightning bolt was used to describe the connection of the spiritual world and the physical world. We also find the symbol used in the mythology of European cultures such as Zeus in ancient Greece and Thor in the Nordic texts.

But in Indra, we also find the vajra is a weapon that we can use to destroy our own demons – desires and temptations that we struggle to overcome, yet need to control so that we can make progress both spiritually and physically. When we improve our true nature, we improve our quality of life.

Mythological gods represent human consciousness and human nature. This is why we often see gods getting angry, deceitful and jealous in ancient legends. Indra is a prime example of how man can be god-like, but culpable of making mistakes. This is because of the basic instincts of our animal nature.

Whilst studying human consciousness, the ancients realised this which is why Indra was replaced by the Trimurti as the highest of gods. His replacements Vishnu and Shiva are higher and more powerful representations of Indra.

Whilst Indra still represents an important aspect of our higher consciousness, his pride and arrogance cause him to lose control of the heavens. It is during these times that our demons take advantage and Indra is forced to wage war in order to regain control. 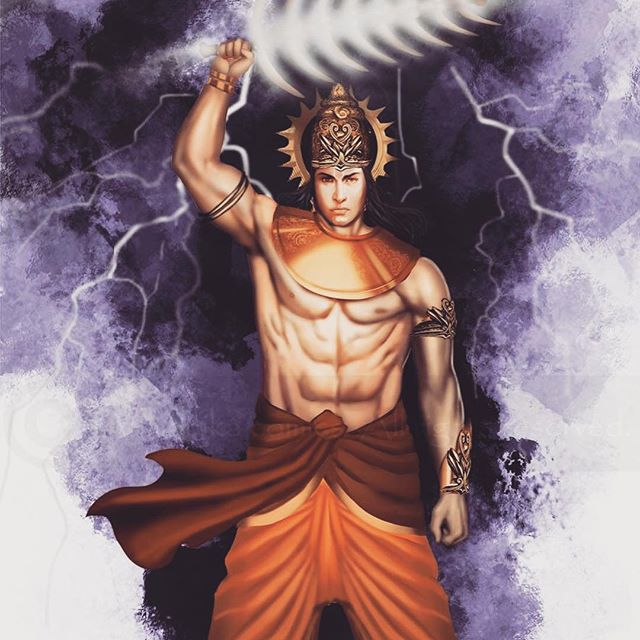 The Symbolic Meaning of Indra

Indra was originally classed as a Sun God because of his ability to create. However, it has been suggested the original sun for ancient civilisations was Saturn, which is associated with Satan and thus represents our dark side. The sun and Saturn are at the opposing ends of the planetary system, just as base conscious and higher conscious are scaled along the nine levels of consciousness.

Either way, gods that are associated with celestial planets, the sun and moon included, represent our seven chakras. In Hindu art, Indra is depicted with a rainbow in the background, another symbol representing the chakras because they share the same colours.

In later myths, Indra became a storm god and is associated with the Rudras, or Maruts as they are called in the Mahabharata. Rain is water which in ancient symbolism is a symbol of fertility as all life comes from water. Indra than has the ability to create.
But storms are also destructive, and it is the destructive qualities of Indra that we need to invoke in order to destroy the demons that lead us off the path of personal development and keep us rooted in the material world of delusion. Our habits, addictions and personality traits cause more damage than good in our lives.

And remember, the law of cause and effect means that everything we do has a consequence. The energy we put in, is the energy that comes out – and negative habits result in negative experiences.

In some respects, Indra is a reflection of the confidence and courage we need to perform well in the challenges that life presents us. Without these challenges, we cannot progress physically or spiritually.

But Indra’s weakness is that sometimes, his achievements bloat his ego and confidence blurs between the lines of arrogance. There is a fine line between the two. When Indra thinks he is above his own power, he loses his power and ultimately loses control of the Universe – the body and mind – to the asuras.

Let’s take a closer look at how this concept is portrayed in Hindu mythology.

All the battles in which Indra fights, involve recovering something sacred and restoring order; magic armour in the Mahabharata, a herd of sacred cattle in his fight against Vala in the Rig Veda and water in one of his most important battles against Vritra in the Bhagavad Purana.

In the latter story, Indra is caught up in his own pride and allows arrogance to overcome him. He shows disrespect to Mother Earth who warned him his guru will disown him if he continued with his holier than thou attitude.

When Indra fails to show respect to his guru, the sage, Brihaspati, the sage turns his back on him and Indra is left without an advisor. It is only when the Earth is attacked by asuras and Indra need the assistance of the sage to create yagna, the fire of victory, that he realises his guru has abandoned him and left the demigods exposed to their enemies.

Sure enough, the asuras overrun the demigods and Indra is desperate to atone for his mistake. He consults Brahma who tells him to seek the help of Vishwarupa. Indra follows Brahmas instructions, but despite helping them defeat the asuras, Indra does not fully trust Vishwarupa as he is also part asura.

When Indra overhears Vishwarupa dedicating a prayer to his demon brethren, his distrust is confounded and without thinking, slices of his allies head. When Vishwarupa’s father, Tvashta hears of the death of his son, he vows to take vengeance and transforms his other son, Vritra into a powerful dragon the size of a mountain.

Indra and the other demigods battle with Vritra and trick him into defeat and go into hiding. Desperate for revenge, the dragon drinks all the water from the earth in order to bring the gods out of their hiding place. Because Indra is the protector of mankind, he has no option other than to confront Vritra.

During the battle, Indra is swallowed by the giant Vritra, but taking out his vajra, Indra slices open the stomach of the dragon and releases all the water back on to the earth, thus restoring life, law and order.

We later see Indra become an ascetic so that he can learn wisdom so that he can perform his duty as the King of the Gods diligently. During his training, he learns the qualities required to connect the physical world with the spiritual plane.

The Aspects of Human Nature in Indra

Indra represents an aspect of our higher conscious, but even when we know we should not do something, we can be prone to make mistakes. In Hindu myth, Indra is often found drinking soma, an hallucinogenic intoxicant.

Although Indra usually drinks soma to give him courage and confidence in battle, he also indulges in the drug for recreation – this is symbolic of us giving in to our desire to let ourselves go and have a wild night on the town. Although we need to have fun, when we become too intoxicated we lose control of our faculties.

Indra also represents pride, a virtue and a sin. Of course, we have to be proud of our achievements, but we should not allow ourselves to think we are above our fellow human beings. All ancient civilisations teach us of the need to show humility.

As the storm god, Indra has destructive qualities that can overcome demons and restore harmony to the cosmos. So when you do feel like going wild, do not abuse the privilege and do it too often, and if you allow arrogance to take you over, pipe down and enjoy your greatness privately.

Lord Indra is also associated with the three headed elephant Airavata which he rides during battles. When Airavata is with him, Indra never loses a battle. In ancient symbolism, the elephant represents, courage, wisdom and patience, the qualities you need to acquire to overcome the darker sides of human nature and enjoy life in peace.