Ganesha: The Remover of Obstacles 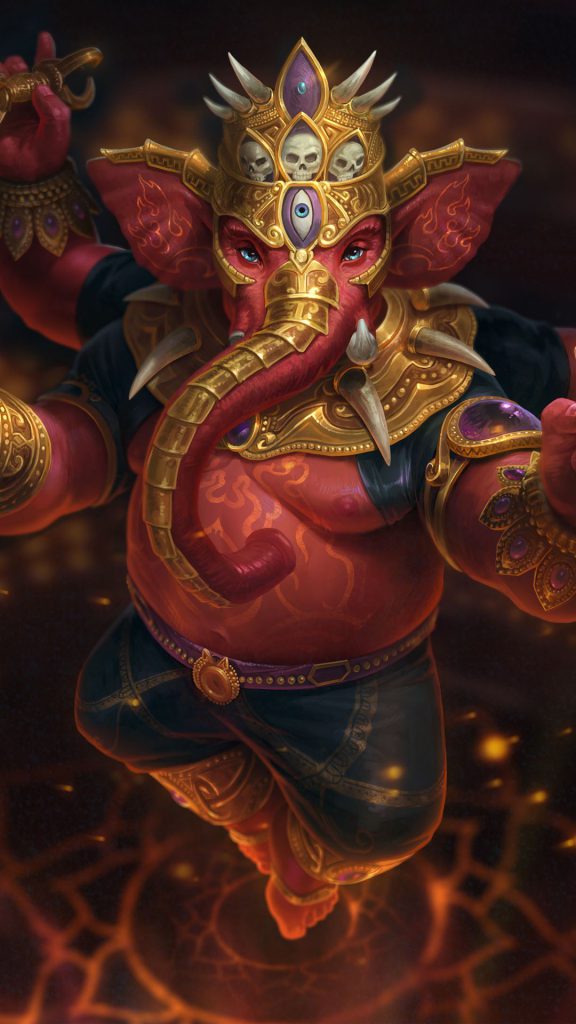 Ganesha, the elephant-headed Hindu god who rides a mouse, is one of the faith’s most important deities. One of the five primary Hindu deities, Ganesha is worshiped by all sects and his image is pervasive in Indian art.

The son of Shiva and Parvati, Ganesha has an elephantine countenance with a curved trunk and big ears atop the pot-bellied body of a four-armed man. He is the lord of success and the destroyer of evils and obstacles, worshiped as the god of education, wisdom, and wealth.

Ganesha is also known as Ganapati, Vinayaka, and Binayak. Worshippers also regard him as the destroyer of vanity, selfishness, and pride, the personification of the material universe in all its manifestations.

Ganesha’s head symbolizes the Atman or the soul, which is the supreme reality of human existence, while his body signifies Maya or mankind’s earthly existence. The elephantine head denotes wisdom and its trunk represents Om, the sound symbol of cosmic reality.

In his upper right hand, Ganesha holds a goad, which helps him propel mankind forward on the eternal path and remove obstacles from the way. The noose in Ganesha’s upper left hand is a gentle implement to capture all difficulties. The broken tusk that Ganesha holds like a pen in his lower right hand is a symbol of sacrifice, which he broke for writing the Mahabharata, one of Sanskrit’s two major texts. The rosary in his other hand suggests that the pursuit of knowledge should be continuous.

The laddoo or sweet he holds in his trunk represents the sweetness of the Atman. His fan-like ears convey that he will always hear the prayers of the faithful. The snake that runs round his waist represents energy in all forms. And he is humble enough to ride the lowest of creatures, a mouse. 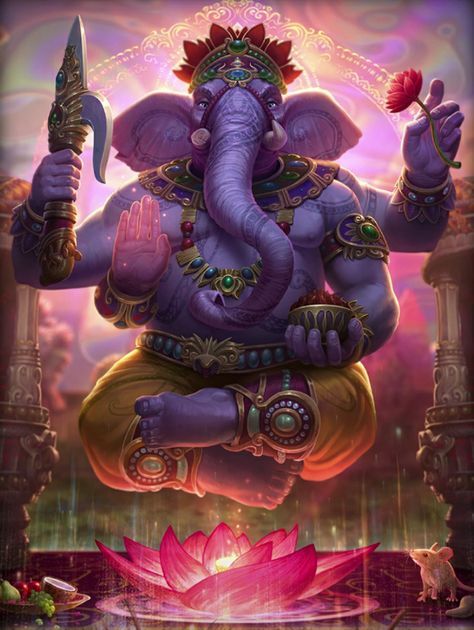 The Origins of Ganesha

The most common story of Ganesha’s birth is depicted in the Hindu scripture Shiva Purana. In this epic, the goddess Parvati creates a boy from the dirt she has washed off her body. She assigns him the task of guarding the entrance to her bathroom. When her husband Shiva returns, he is surprised to find the strange boy denying him access. In a rage, Shiva decapitates him.

Parvati breaks down in grief. To soothe her, Shiva sends out his warriors to fetch the head of any sleeping being who is found facing the north. They return with the severed head of an elephant, which is attached to the boy’s body. Shiva revives the boy, making him the leader of his troops. Shiva also ordains that people will worship Ganesha and invoke his name before undertaking any venture.

There’s a less popular story of Ganesha’s origin, found in the Brahma Vaivarta Purana, another significant Hindu text. In this version, Shiva asks Parvati to observe for one year the teachings of the Punyaka Vrata, a holy text. If she does, it will appease Vishnu and he will grant her a son (which he does).

When gods and goddesses assemble to rejoice in Ganesha’s birth, the deity Shanti refuses to look at the infant. Perturbed at this behavior, Parvati asks him the reason. Shanti replies that his looking at the baby would be fatal. But Parvati insists, and when Shanti looks at the baby, the child’s head is severed. Distressed, Vishnu hurries to find a new head, returning with that of a young elephant. The head is attached to Ganesha’s body and he is revived.

The Worship of Ganesha

Unlike some other Hindu gods and goddesses, Ganesha is nonsectarian. Worshippers, called Ganapatyas, can be found in all sects of the faith. As the god of beginnings, Ganesha is celebrated at events big and small. The biggest of them is the 10-day festival called Ganesh Chaturthi, which typically takes place each August or September.