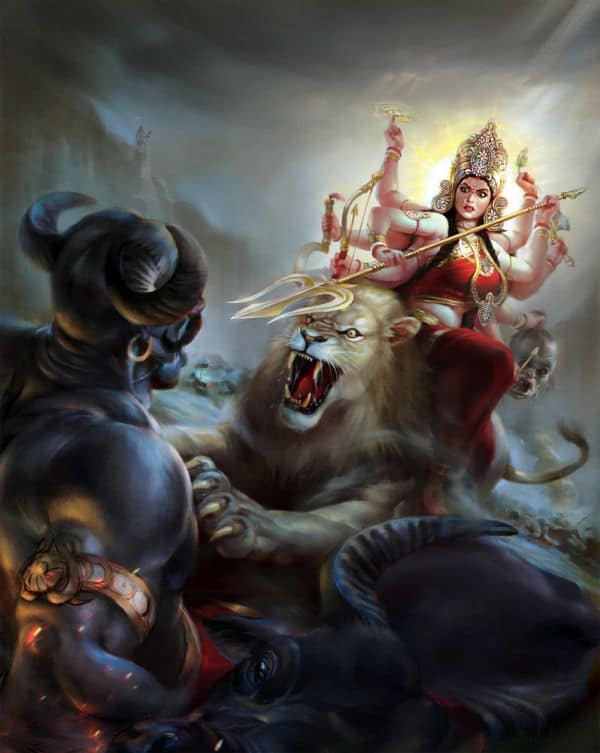 In Hinduism, the goddess Durga, also known as Shakti or Devi, is the protective mother of the universe. She is one of the faith’s most popular deities, a protector of all that is good and harmonious in the world. Sitting astride a lion or tiger, the multi-limbed Durga battles the forces of evil in the world.

Durga’s Name and Its Meaning

In Sanskrit, Durga means “a fort” or “a place that is difficult to overrun,” an apt metaphor for this deity’s protective, militant nature. Durga is sometimes referred to as Durgatinashini, which literally translates into “the one who eliminates sufferings.”

In Hinduism, the major gods and goddesses have multiple incarnations, meaning they can appear on earth as any number of other deities. Durga is no different; among her many avatars are Kali, Bhagvati, Bhavani, Ambika, Lalita, Gauri, Kandalini, Java, and Rajeswari.

When Durga appears as herself, she manifests in one of nine appellations or forms: Skondamata, Kusumanda, Shailaputri, Kaalratri, Brahmacharini, Maha Gauri, Katyayani, Chandraghanta, and Siddhidatri. Collectively known as the Navadurga, each of these deities have their own holidays in the Hindu calendar and special prayers and songs of praise.

Befitting her role as mother protector, Durga is multi-limbed so that she may always be ready to battle evil from any direction. In most depictions, she has between eight and 18 arms and holds a symbolic object in each hand. 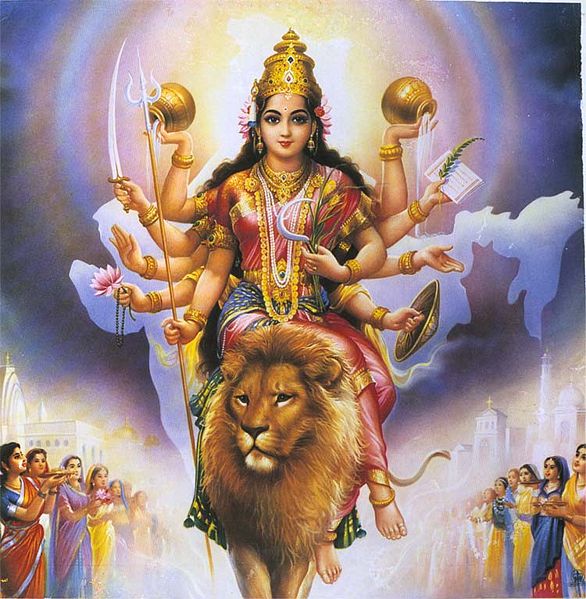 Durga carries a variety of weapons and other items that she uses in her fight against evil. Each has a symbolic meaning important to Hinduism; these are the most significant:

The conch shell symbolizes the Pranava or the mystic word Om, which indicates her holding on to God in the form of sound.

The thunderbolt signifies firmness in one’s convictions. Just as a real bolt of lightning can destroy anything it strikes, Durga reminds Hindus to attack a challenge without losing confidence.

The lotus in Durga’s hand, not yet fully in bloom, represents the certainty of success but not finality. The lotus in Sanskrit is called Pankaj, which means “born of mud,” reminding the faithful to stay true to their spiritual quest amid the worldly mud of lust and greed.

The Sudarshan-Chakra or beautiful discus, which spins around the index finger of the Goddess, signifies that the entire world is subservient to the will of Durga and is at her command. She uses this unfailing weapon to destroy evil and produce an environment conducive to the growth of righteousness.

The sword that Durga holds in one of her hands symbolizes knowledge, which has the sharpness of a sword. Knowledge free from all doubts is symbolized by the shine of the sword.

The trident or Trishul is a symbol of three qualities: Satwa (inactivity), Rajas (activity), and Tamas (nonactivity). Deva uses these to alleviate physical, mental, and spiritual suffering.

In Hindu art and iconography, Durga is frequently depicted standing atop or riding a tiger or lion, which represents power, will, and determination. In riding this fearsome beast, Durga symbolizes her mastery over all these qualities. Her bold pose is called Abhay Mudra, which means “freedom from fear.” Just as the mother goddess confronts evil without fear, Hindu scripture teaches, so too should Hindu faithful conduct themselves in a righteous, courageous way.

With its numerous deities, there is no end of holidays and festivals in the Hindu calendar. As one of the faith’s most popular goddesses, Durga is celebrated many times in the year. The most notable festival in her honor is Durga Puja, a four-day celebration held in September or October, depending on when it falls on the Hindu lunisolar calendar. During Durga Puja, Hindus celebrate her victory over evil with special prayers and readings, decorations at temples and homes, and dramatic events recounting Durga’s legend.