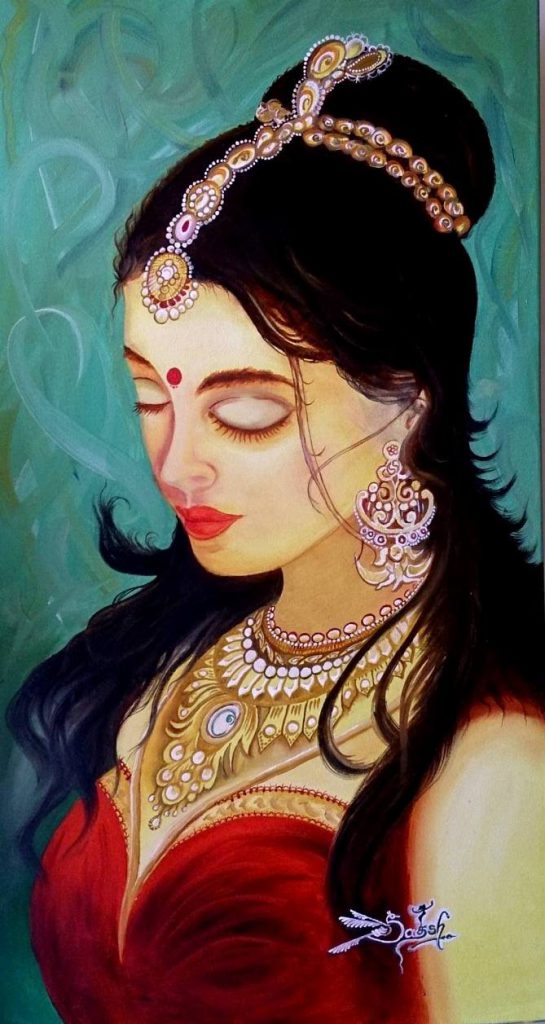 Sita, (Sanskrit: “Furrow”) also called Janaki, in Hinduism, the consort of the god Rama. Her abduction by the demon king Ravana and subsequent rescue are the central incidents in the great Hindu epic Ramayana (“Rama’s Journey”).

Sita is worshipped as the incarnation of Lakshmi, the consort of Vishnu. Though often regarded as the embodiment of wifely devotion and self-sacrifice, she is critical of Rama at times, even in the earliest version of the Ramayana, and in some of the later versions of the story she departs from the idealized, chaste image of the earlier text. She is frequently depicted in Indian miniature paintings of the Ramayana and in South Indian bronzes. These usually form a group, with images of Rama, his brother Lakshmana, and his devotee, the monkey Hanuman. The iconographic texts instruct the artist to show Sita looking at her husband with supreme happiness.

Devi Sita, the divine heavenly goddess and wife of Lord Rama, is one of the most popular goddesses in the Hindu religion. She is the incarnation of Lakshmi, the wife of supreme god Vishnu. Her husband Rama is the avatar of Lord Vishnu, his seventh incarnation. Sita represents the ideal wife, daughter and mother to the Hindu people, and is remembered for her fine attributes and revered for having the noblest qualities of women.

Sita is the female protagonist in the Epic of Ramayana. The adopted child of King Janaka and Queen Sunaina, the young goddess married Lord Rama and devotedly accompanied him when he was exiled to the forest. She was later captured, imprisoned and eventually rescued. Sita remained honorable throughout the tribulations of her life and finally escaped the cruelty of the world by returning to the arms of Mother Earth.

Sita was the abandoned natural child of Bhūmi, Mother Earth, and was discovered in a field. She was adopted by King Jananka of Mithila (now Nepal) and his wife Queen Sunaina.

Still young but of marriageable age, Sita began the preparation for her Swayamvara, a ceremony held at the palace for noble suitors to gather from far and wide, in the hope of being chosen by the princess to be her husband.

One day, as she walked out on the terrace of her room to get some air, she saw Rama standing below. Their eyes met and they fell in love at first sight. This seems fitting, as they were the reincarnations of Vishnu and his wife Lakshmi meeting once again.

The Swayamvara begins with the arrival of the men, including Rama, his brother Lakshmana and the demon King of Lanka, namely Ravana, sporting his 10 ugly heads.

As the legend explains, King Janaka had been given a huge bow as a gift from Lord Shiva. When Sita was a small child, Lord Parashurama (an avatar of the god Vishnu) admired her playing with the gigantic bow and advised Janaka to only allow his daughter to marry a man who could lift the bow.

As the Swayamvara ceremony commenced, Janaka welcomed the suitors to the palace and explained that the man who could lift and string the bow of Shiva would have his daughter’s hand in marriage. One by one, the kings and princes unsuccessfully attempted the feat.

When the turn of the arrogant Ravana came along, he declared he was so strong he would lift the bow with the pinky finger of his left hand. That didn’t work out very well, and so he finally tried to lift it with both hands. After several tries, he too admitted defeat.

Finally Rama approached the task. He gracefully lifted the bow and strung it, surprising the watching crowd.

The wedding of Sita and Rama took place shortly thereafter. Sita was blissful as her wishes had come true and she was marrying her true love.

The Exile of Sita and Rama

Rama, the eldest son of King Dasaratha, was heir to the throne. When the plans to crown him were announced, the Queen Kaikeyi was upset as her mind had been poisoned by a wicked servant. While at first she was very happy for her first born son, she later became fearful for the safety of another son, Bharata. Having been previously granted two favors by her husband for saving his life in a battle, she called in her first favor and requested Rama be sent into exile so Bharata could be crowned in his place.

Heartbroken as he was, the king’s hand was forced and he sent Rama off to the forest for 14 years. His brother Lakshmana decided to escort him and the two began preparations. Sita insisted on joining him as well. No matter how Rama tried to discourage the idea, she remained firm in her duty to stand by his side. King Dasaratha sadly died the next day, as he was so distraught about having sent away his eldest son. Rama didn’t want to break the word of his deceased father, and the three journeyed to the forest.

Sita, who had always lived in a palace of the highest standard, sacrificed all for her husband. He loved her completely and took care of her. They shared many happy moments together, despite the conditions. 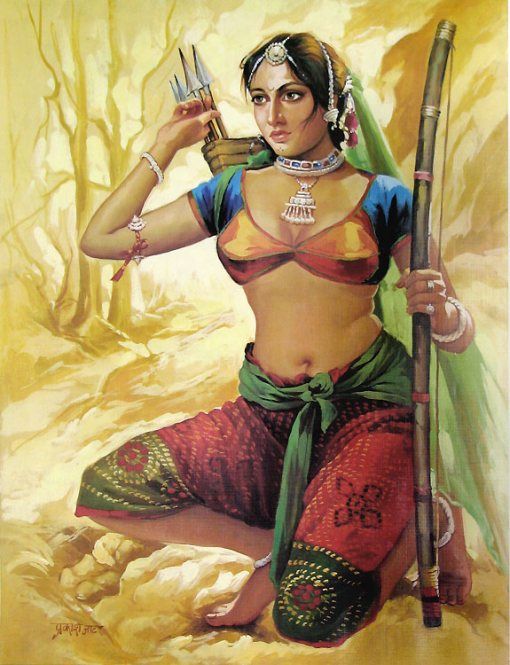 The Abduction of Sita

The jealous and evil Ravana disguised his uncle by transforming him into a golden deer and sending him into the forest. Sita, enchanted with the pretty animal, asked Rama to capture the deer and bring it to her. Hesitantly he went, but made his brother promise to stay by Sita’s side.

Rama headed deeper into the forest, found the deer and readied his bow, but the deer called out, imitating the voice of Rama, “Lakshmana, Oh Lakshmana” – a cry for help. When she heard the crying out of her husband, Sita begged her brother–in-law to go the aid of Rama, and he was eventually convinced to do it, even though he had promised not to leave her side.

Now alone, Sita was easy prey, and Ravana arrived disguised as a beggar. When she attempted to help him, he grabbed her and put her in his chariot, to take her away. The two men returned to find her missing and began to desperately search the forest. They found a friend, Jatayu, an eagle, bleeding with his wings cut off. Jatayu tried to fight Ravana and save Sita but he was rendered helpless by the monster. He did point the men in the right direction before he took his very last breath.

Sita was held captive in a garden guarded by demons. Ravana instructed them to help persuade her into marrying him, but even after a year had passed, she refused his advances. According to the Hindu texts, the Ramayana and the Mahabharata, Hanuman, the supernatural monkey and his army of monkeys, Vanara Sena helped Rama to save Sita. After a long battle, Rama slayed the demon and Sita was released from captivity.

They returned to the kingdom, and the people demanded proof of her chastity since she had been held for a year by Ravana. To prove herself, she walked through a fire and the coals turned to lotus blossoms beneath her feet.

The Sons of Sita

Rama was crowned king, and Sita ruled with him for a short while until the people once again doubted her chastity. To appease them, Rama sent her back to exile, despite the fact that he was certain of her chastity and loyalty. He had his brother take her deep in to the forest and leave her there alone. By this time she was already pregnant and particularly vulnerable.

A kind sage named Valmiki found Sita, and took her into his ashram where he cared for her. She eventually delivered twin boys, Luv and Kush. They learned to be great warriors under the tutelage of the sage, with a particular talent for archery.

Rama, on the other hand, missed his family terribly. To further prove his imperial authority, he began the Ashvamedha. This was a ritualistic sacrifice involving a horse released to roam the kingdom and surrounding areas for an entire year accompanied by the king’s soldiers. If no enemy killed or captured the horse, or won a battle with the warriors during that time, supreme sovereignty would be declared, may no longer be challenged, and the horse would be led back home to be sacrificed.

The horse wandered into the forest and Luv and Kush quickly captured it. Rama sent his brothers to fight the twins and they returned defeated so Rama stepped in to confront them himself. He expected to win easily, but it didn’t happen quite that way, and Rama was so impressed with the twins’ abilities, he invited them back to his palace. At that point, their identity was revealed and Rama was reunited with his own twin sons.

Once her sons had been united with their father, Sita felt the circle of her life’s mission had been completed. Rama asked her to once again to be by his side as his queen but she no longer wanted to return to him or the kingdom.

She appealed to Bhūmi, Mother Earth, to take her back into her arms and release her from the sadness of her life. The earth split open, and the earth mother took Sita’s hand and gently led her down inside to a better world, marking the end of the Devi Sita’s avatar.

Sita is still held up as the ideal woman in India and Nepal today. Her virtue throughout her demanding existence exemplifies the ideal traits of women, although modernists also view her character as a weak woman who always required male protection and intervention.

Her husband Lord Rama is worshipped as an ideal king who considered his people first. The two remain popular deities today. They appear together in temples all over India. The Ramayana that tells their story is an integral part of Hinduism.

There are a few temples dedicated exclusively to Sita. The Janaki Mandir in Nepal is the location where the fabled wedding of Sita and Rama took place. Each year, there is a pilgrimage to the temple and their wedding is replicated in a festival called Vivaha Panchami.