Chandra is a lunar deity and is also one of the Navagraha in Hinduism. He is considered as a fruitfulness God.

When Lord Brahma created seven ‘rishis’ (sages), he instructed them to aid him in his creation by engaging in procreation. The seven ‘rishis’ are Vashishta, Marichi, Pulastya, Pulaha, Atri, Angiras and Kratu. Atri was married to Anusuya and had no children, Anusuya was very virtuous and so the trinity Lord Brahma, Lord Vishnu and Lord Shiva wanted to test Anusuya. Then they transformed themselves into three sages and appeared before Atri and Anusuya, asking them to serve food. They were welcomed into the house and the trinity said they follow some principles and only if food is served adhering to those principles, they would accept it and the couple agreed.

The trinity said they wanted to see Anusuya naked and then she serve them food and Atri was shocked to hear this. Anusuya instantly agreed and transformed the trinity into infants and started feeding them. Sage Narada then came to know about this and informed the trinity ‘devis’ Parvati, Lakshmi and Saraswati. The devis come to meet Anusuya and request her to release them from infants and gave them back their divine trinity form. Anusuya agreed to this request and the trinity appeared as Lord Brahma, Lord Vishnu and Lord Shivaalong with their devis. Pleased with Anusuya’s virtue, they offered them a boon, to which the couple asked for a son who will be remembered forever by mother earth and who will prove useful to human and other life forms.

Therefore, 3 sons were born, Soma (Chandra), Durvasa and Dattatreya. Soma (Chandra) obtained or achieved the status of a Navagraha and thus came into being the origin of Lunar Dynasty. Soma (Chandra) performed severe penance and received several boons from the trinity. Among the boons he received were to influence the human mind. The blessings of Lord Vishnu conferred the title to Soma as Lord Chandra. Chandra was married to the twenty seven (27) daughters of Daksha, son of Lord Brahma. Those 27 daughters are the 27 lunar asterisms or stars. 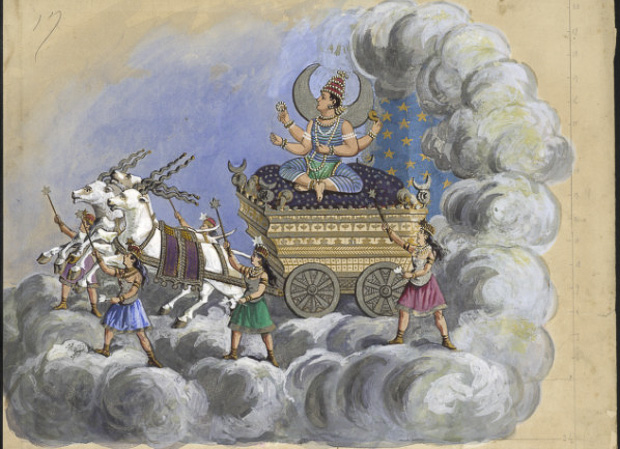 Once, Chandra decided to perform the greatest of ‘Yagnas’, Rajasuya Yagna and went to invite Lord Brahma to receive his blessings. Then he went to Deva Loka to invite Lord Indra and other Devas to attend the ‘Yagna’. Chandra requested Brihaspathi (Deva Guru) to manage as the main priest to perform the ‘Yagna’ and Brihaspathi agreed. As the ‘Yagna’ was progressing, Chandra began to attain more beautiful form to such an extent that all the ‘Apsaras’ and including Deva Guru’s wife Taara began to fall for Chandra’s beauty. The women could not take their eyes off Chandra and this made the Deva Loka men jealous and they left the ‘Yagna’. All of the Deva Loka women left the ‘Yagna’ except Taara. The matter reached Lord Shiva and he asked Chandra to send Taara back and Chandra said he could not force Taara to go back. Lord Shiva got angry on hearing this and started a war with Chandra. Lord Indra requested Lord Brahma to stop the war and Lord Brahma who cursed Chandra to become a Sinner. Lord Brahma asked Chandra to sent Taara to Brihaspathi and if forgiven then Brihaspathi’s Yellow rays would remove the curse.

Deva guru found Taara had conceived and Guru Brihaspathi did not accept the baby and asked her to return the baby to Chandra. Chandra asked his 27 wives to take care of the baby and the baby is named as ‘Budha’ (Mercury). Chandra realized that he did not have the power to stop Daksha’s mystic powers of his curse and so approached Lord Indra with his woes. Chandra got cursed by Lord Brahma and later released from the curse after Lord Brahma realized Chandra’s planetary position. Then, Chandra again got cursed by Daksha and the effect of the curse was so strong that Chandra was unable to release him from it hence Lord Indra asked Chandra to approach Lord Brahma.

Chandra went to Lord Brahma and asked for a solution to remove Daksha’s curse. Then Chandra went to Lord Shiva and surrendered himself to Lord Shiva. Lord Shiva was kind on Chandra and said Chandra that soon his brightness and beauty would boost gradually and he will shine in 15 days. However, Daksha’s curse could not be entirely removed, so in the next 15 days his radiance will decline each day and will lose his glow. Thus came into being, Lord Chandra as per the boon that Atri and Anusuya received from the trinity, a boon that asked for a son who will be remembered forever by mother earth and who will prove useful to human and other life forms.