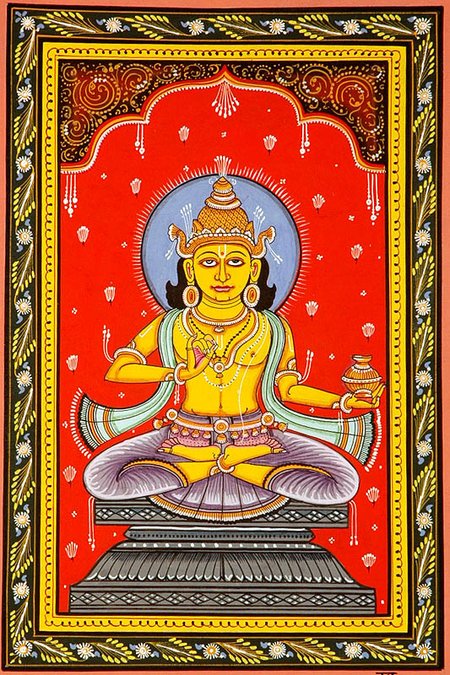 Budha graha  is a Sanskrit word that connotes the planet Mercury. Budha, in puranic Hindu mythology, is also a deity.

He is also known as Saumya (son of Moon), Rauhineya and Tunga

Budha appears as a deity in Indian texts, often as the son of Soma (moon god, Chandra) and Taraka (wife of Bṛhaspati, Jupiter god). The mythology of Budha as a deity is not consistent in Hindu Puranas, and he alternatively is described as the son of goddess Rohini (a daughter of Daksha) and god Soma. By his spouse Ila, Budha had a son, king Pururavas.

One of the earliest mentions of Budha as a celestial body appears in the Vedic text Pancavimsa Brahmana, and it appears in other ancient texts such as the Shatapatha Brahmana as well, but not in the context of astrology. In the ancient texts, Budha is linked to three steps of the Hindu god Vishnu.

Budha’s iconography, according to Roshen Dalal, is as a benevolent but a minor male deity with light yellow colored body (or green), draped into yellow clothes, with a chariot made of air and fire, drawn by eight wind horses. He is also represented holding a scimitar, a club and a shield, riding a winged lion in Bhudhan Temple. In other illustrations, he rides a lion and has four arms.

Budha is not etymologically, mythologically or otherwise related to Buddha, the founder of Buddhism, though some careless textual claims to this link have occasionally appeared, according to Patrick Gray. 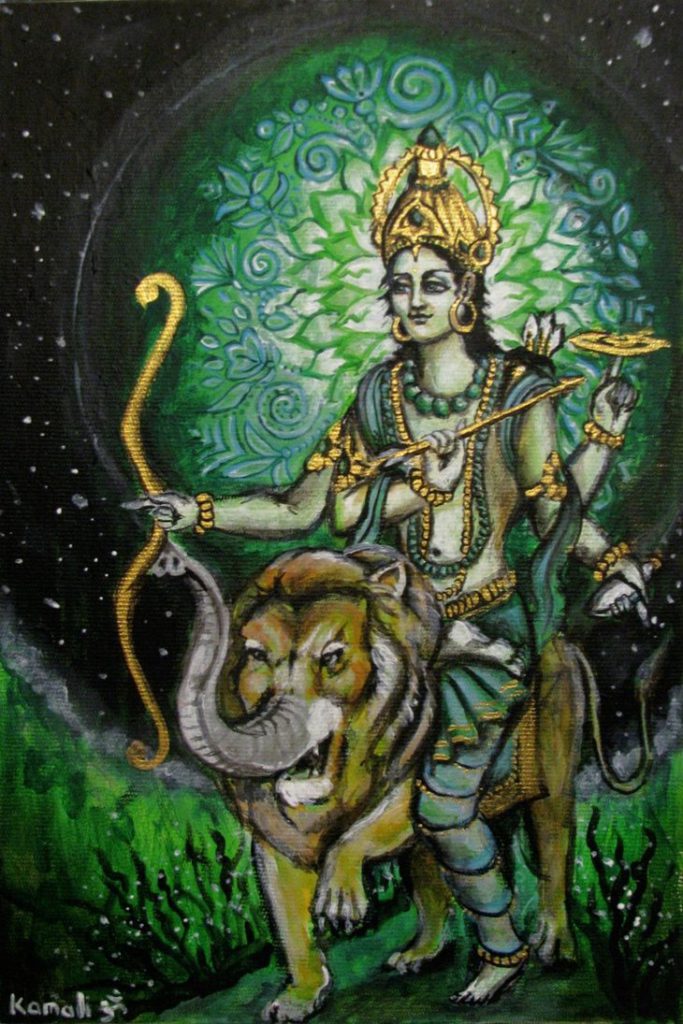 Budha as a planet appears in various Hindu astronomical texts in Sanskrit, such as the 5th century Aryabhatiya by Aryabhatta, the 6th century Romaka by Latadeva and Panca Siddhantika by Varahamihira, the 7th century Khandakhadyaka by Brahmagupta and the 8th century Sisyadhivrddida by Lalla. These texts present Budha as one of the planets and estimate the characteristics of the respective planetary motion. Other texts such as Surya Siddhanta dated to have been complete sometime between the 5th century and 10th century present their chapters on various planets with deity mythologies.

The manuscripts of these texts exist in slightly different versions, present Budha’s motion in the skies, but vary in their data, suggesting that the text were open and revised over their lives. The texts slightly disagree in their data, in their measurements of Budha’s revolutions, apogee, epicycles, nodal longitudes, orbital inclination, and other parameters. For example, both Khandakhadyaka and Surya Siddhanta of Varaha state that Budha completes 17,937,000 revolutions on its own axis every 4,320,000 years, and had an apogee (aphelia) of 220 degrees in 499 CE; while another manuscript of Surya Siddhanta increases the revolutions by 60 to 17,937,060, and the apogee to 220 degrees and 26 seconds.

The 1st millennium CE Hindu scholars had estimated the time it took for sidereal revolutions of each planet including Budha, from their astronomical studies, with slightly different results.

Budha is the root of the word ‘Budhavara’ or Wednesday in the Hindu calendar. The word “Wednesday” in the Greco-Roman and other Indo-European calendars is also dedicated to planet Mercury (“day of Woden or Oden”). Budha is part of the Navagraha in Hindu zodiac system, considered benevolent, associated with an agile mind and memory. The zodiac and naming system of Hindu astrology, with Budha as Mercury, likely developed in the centuries after the arrival of Greek astrology with Alexander the Great, their zodiac signs being nearly identical.