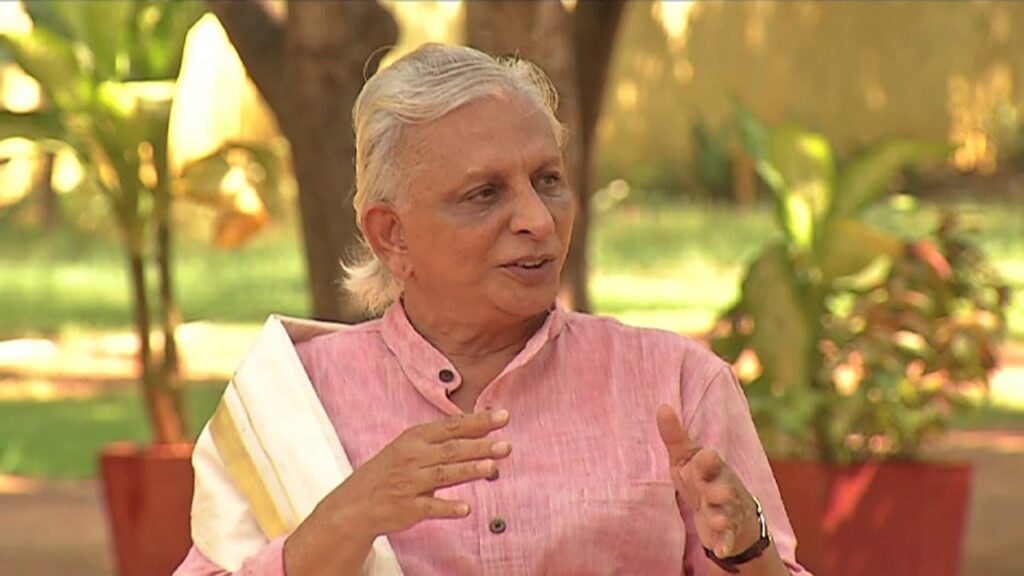 Sri M (born Mumtaz Ali Khan) is a yogi and a disciple of Sri Maheshwarnath Babaji, who was a disciple of Mahavatar Babaji . Sri M, also known as Sri Madhukarnath ji, is an initiate of the Nath sub-tradition of Hinduism. He lives in Madanapalle, Andhra Pradesh, India. Sri M received the Padma Bhushan, India’s third-highest civilian award, in 2020.

His transformational journey, from a young boy to a living yogi, is a fascinating story symbolized by single-minded discipline and dedication.

Entranced by mystical stories of Sufi saints and a brief encounter with a numinous Swami at a relatively young age, he was not only drawn to the ‘truth’ but also the compelling landscape of the snow-clad Himalayas. At the age of nine, his spiritual transformation was initiated by his future Master, Babaji (also known as Maheshwarnath Babaji), who miraculously appeared under a jackfruit tree in the compound of his house in Thiruvananthapuram. Though only fleeting, this meeting definitively set the stage for their future reunion in the Himalayas at Sri M’s age of nineteen.

After the fortuitous meeting with Babaji, the next decade saw him go through a dichotomy of experiences – both material and mystical – combining the adventure of his teenage years with the esoteric magnetism of religious texts and the spiritual allure of local holy men and saints. He met Yogi Gopala Saami, Kaladi Mastan, Swami Abhedananda, Chempazhanti Swami, Swami Tapasyananda and Mai Ma during this time. At nineteen, wise beyond his years, he embarked on his journey to the Himalayas, seeking a true Master.

While traveling to Haridwar – the gateway to Badrinath and Kedarnath – his name and appearance evolved to that of a jigyasu (seeker of truth). His journey progressed to Rishikesh, where he lived in the Divine Life Society for couple of weeks. During this interlude, he practiced yoga, attended Upanishad classes, visited nearby ashrams, and interacted with seemingly enlightened holy men in search of his own Master.

He then traveled to Badrinath – a 220 km soul-seeking passage on foot – arriving famished in the town of his destiny. Assuming his search was futile, he gave up hope and was on the verge of giving up his life. About to jump into the Alaknanda River, his fortitude was rewarded by the luminous appearance of his Guru Babaji, who swiftly took him under his spiritual tutelage and initiated him into the Nath tradition.

The next three and half years, he lived and travelled extensively through the Himalayas with his Master. Maheshwarnath Babaji guided him right through his initiation, his Kundalini awakening, the grueling journey to Tholingmutt and, the eventual meeting with the Grand Master, Sri Guru Babaji also known as Sri Mahavatar Babaji.

His Master then encouraged him to return to the plains – to start a family life and prepare for his life’s mission. He was periodically instructed to visit holy places across the subcontinent – Marutwa Malai, Ajmer, Dakshineshwar, Belur Matt, Puri, Benaras, Alandi, Shirdiand Tiruvannamalai – to familiarize himself with diverse spiritual traditions. He met saints from all religions including NeemKaroli Baba and, also interacted with LaxmanJoo and J.Krishnamurti.

Few years after his Master passed away, he received the spiritual go-ahead to commence his mission. In 1998, he started his teachings, eventually leading to formation of The Satsang Foundation.

Traveling extensively unto the present day, he has quietly gone about his life’s mission – teaching and guiding people as per his Master’s instructions. 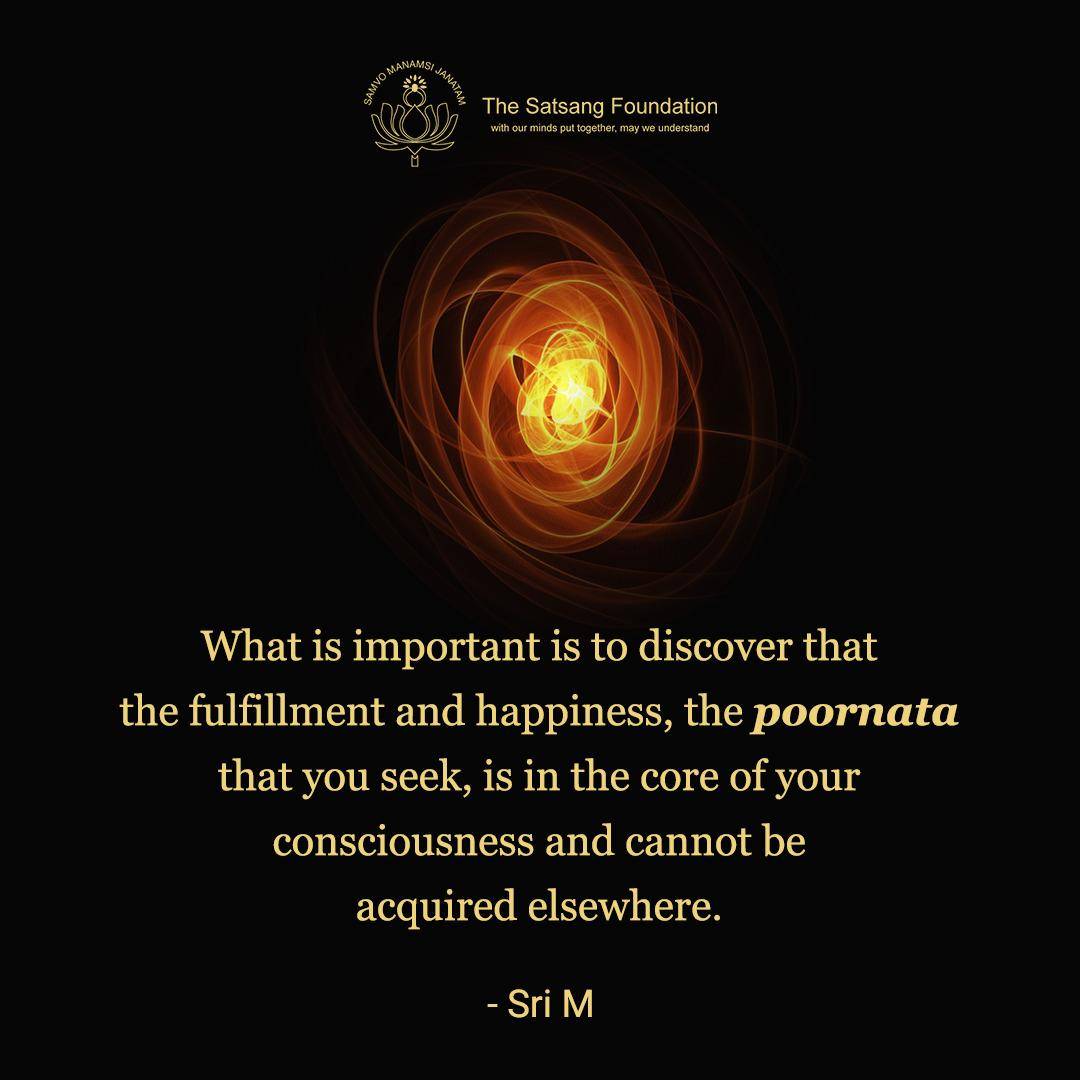 In response to a query on the spiritual progress of a person and the path to that evolution, he responds, “Though, my parampara is kriya yoga, I don’t think it suits all aspirants. I propound satsang even between two people. It cuts across barriers of caste and creed. Spiritual evolution is not diverse from regular living. Intervals of solitude are necessary but you cannot shut yourself totally. The world around you is your touchstone to spiritual practice.”

Conversant with teachings of most major religions, Sri M says: “Go to the core. Theories are of no use.” His message seeks to transcend the outer-shell of all religions, by exploring their mystical core to nurture the innate goodness in every human being.

n 2011, he wrote his memoir “Apprenticed to a Himalayan Master – A Yogi’s Autobiography“, which became an instant bestseller. A sequel, “The Journey Continues” was published in 2017. Sri M has also authored several texts on the Upanishads, on Meditation, and a novel “Shunya”. His book ‘On Meditation – Finding infinite bliss and power within,’ was published by Penguin India.

Two books were released in 2020 – ‘Homecoming and Other Short Stories’, a collection of short stories again by Penguin and a translation and commentary on Patanjali’s Yoga Sutras – titled ‘Yoga also for the Godless’ published by Westland Publications. All his books have been translated into many Indian languages.

As a key-note speaker, Sri M has been invited to many institutions like the World Health Organization, United Nations Office in Switzerland, World Bank in the United States of America and the Indian Institute of Science, Bangalore. He has addressed corporates in India and overseas. To name a few, Google and Yahoo in the US, respected business and technical education institutes like the Indian Institute of Managements in Ahmedabad, Bangalore, Kolkata and Mumbai, Indian Institute of Technology, in Delhi, etc. Sri M has recently been appointed as Adjunct Professor of Practice (APoP) in the Department of NRCVEE – National Research Centre for Value Education in Engineering at IIT, Delhi.

Among the many awards and honours he has received for his contribution to society, Sri M was conferred with the Padma Bhushan in January 2020, one of the highest civilian awards of India, for distinguished service of high order in spirituality.

Sri M is married and has two children. Based in Madanapalle, Andhra Pradesh (three hours drive from Bangalore), he leads a simple life – teaching and guiding the Satsang Foundation. Appreciative of music, he leads the satsangs often with his mellifluous voice. He also writes and paints in his leisure time.

Over the years, Sri M’s efforts as a social reformer and educationist have given rise to many successful initiatives in the sectors of Education, Health & Wellness, Community Welfare, Sustainable Living, Environment, Interfaith Harmony, Peace and Exploring Consciousness. 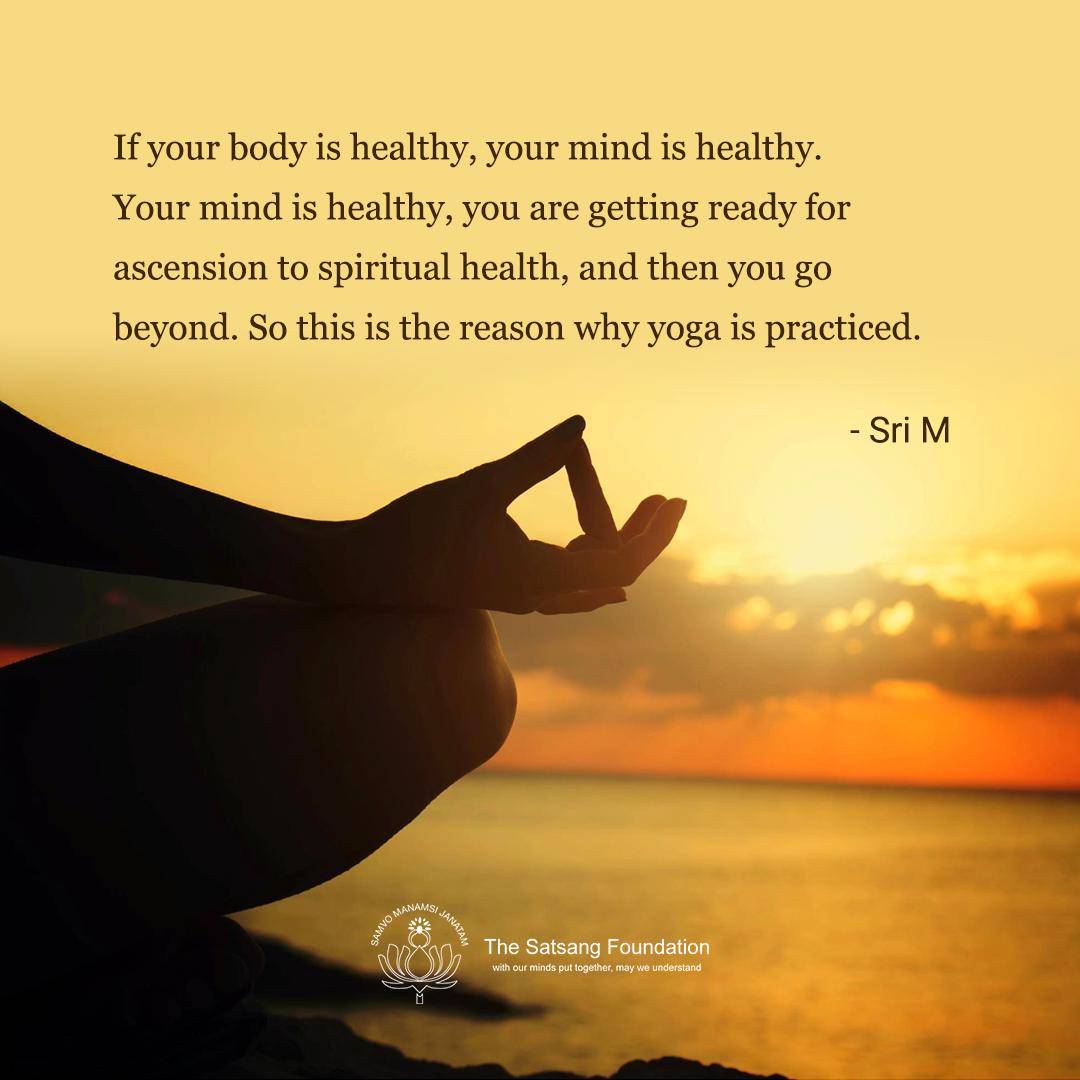 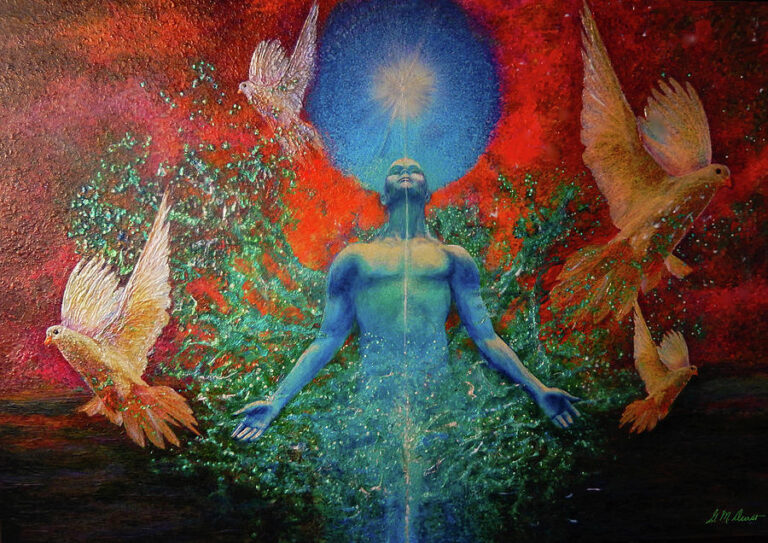 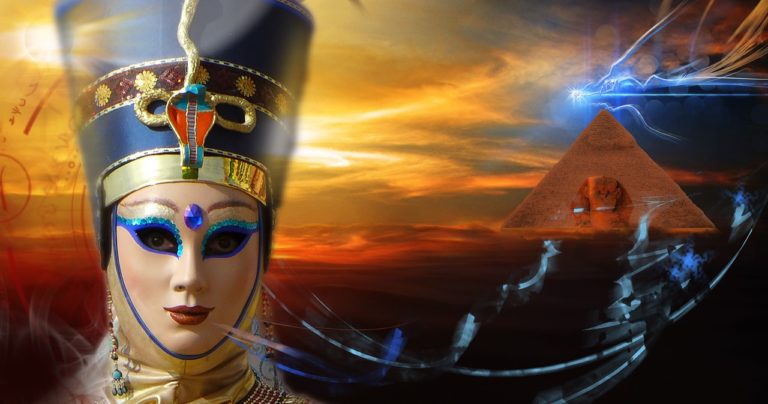 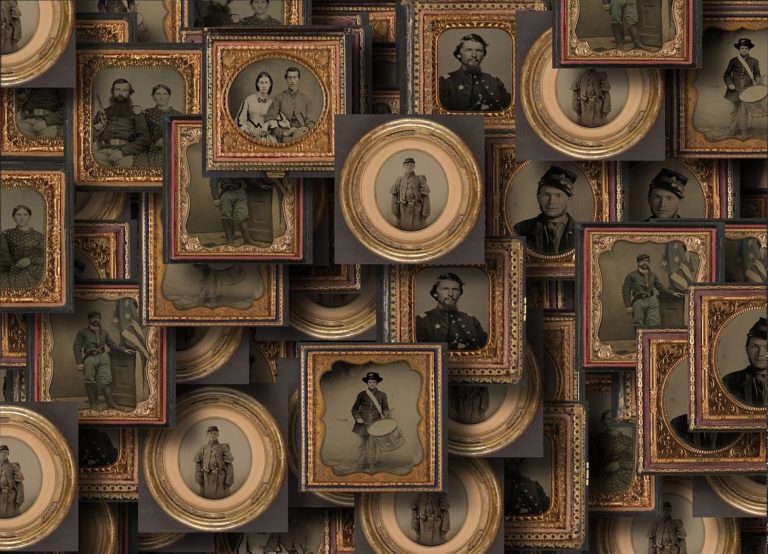 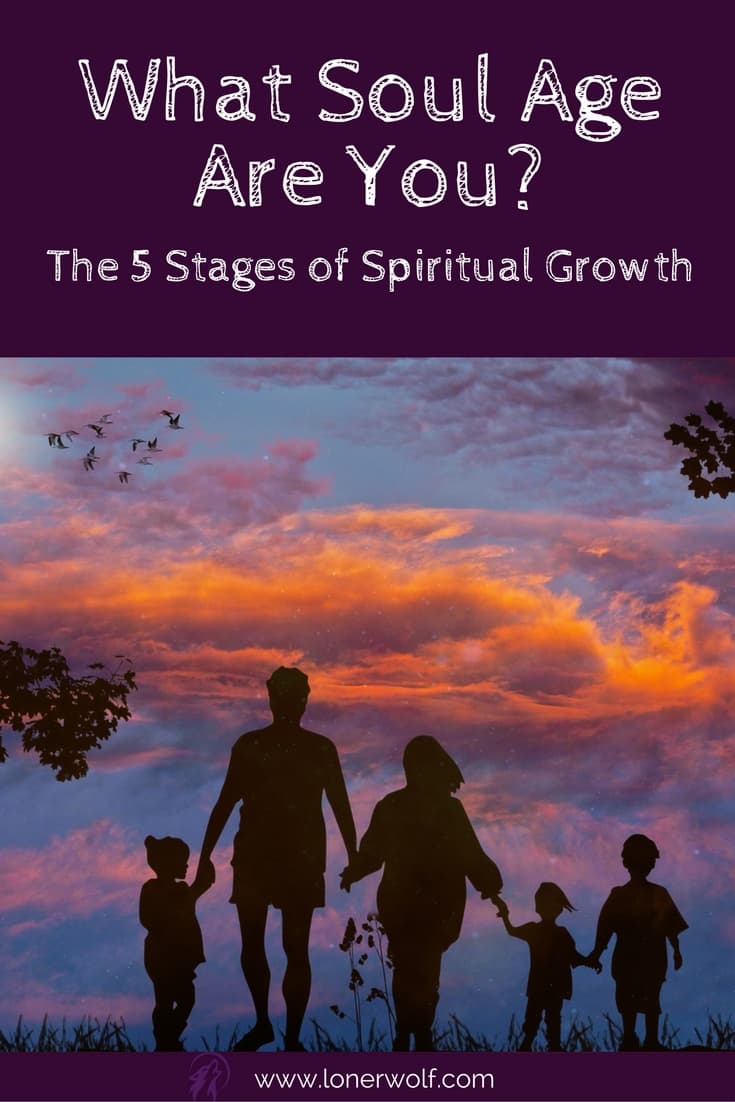